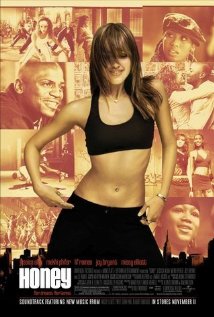 Honey Daniels is a young African American woman who teaches Hip Hop to the ‘hood kids’ during the day at a local youth centre and is a bartender by night. She aspires to dance in a music video clip and goes to many auditions to try out but without luck. Her best friend Gina is a constant source of encouragement to her whereas her mother would prefer her to get out and see the world and maybe teach ballet. As it happens, Michael Ellis, a successful video producer, spots Honey one night dancing in the nightclub and invites her to come to his studios to audition. Honey is an immediate success and goes on to replace the choreographer.

While she was teaching at the youth centre, Honey befriended a couple of young lads, Raymond and Benny, who love to dance. Unfortunately life in the Bronx is often difficult and Benny is forced into drug dealing by his older brother. Benny is arrested and put into juvenile detention. Honey decides it would be good for Benny to dance in a video clip and persuades him to be involved, along with all of the other kids from the youth centre. At first Michael is agreeable to Honey’s idea, but when she rejects his sexual advances, he cancels the video, much to the disappointment of the kids. Not to be dissuaded, Honey decides to get the kids to perform for a benefit concert to raise funds for a new youth centre.

Children in this age group would be frightened by the above mentioned scenes and also the following:

Children in this age group are also likely to find the above material scary or disturbing.

Children in this age group could still be frightened by some of the scenes in this movie particularly Bebe threatening Honey and Michael Ellis trying to force himself onto Honey.

Some children in this age group could still be disturbed by the above mentioned scenes.

There are a few sexual references in this movie including:

There is no actual nudity or sexual activity; however:

There is a lot of drinking in the nightclub.
There are a couple of drug deals shown with the consequence that Benny is arrested.

There is a fair amount of coarse language including the following:

The take home message would be that it is possible for children from a disadvantaged background to make better choices for themselves and not to continue in the expected negative downward spiral.