Honey I Shrunk the Kids 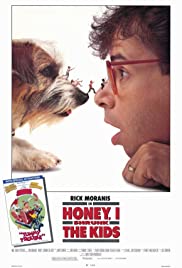 Not suitable under 6; parental guidance to 10 (violence, scary scenes of peril, themes)

Wayne Szalinski (Rick Moranis) has spent ages attempting to create a shrinking machine. He has been so obsessed that it has nearly cost him his marriage. The day he realises that no one will take him seriously is the day he discovers that his machine actually works. Unfortunately, he is not there at the time and it shrinks both his daughter Amy (Amy O’Neill) and his son Nick (Robert Oliveri), along with his neighbour’s two children Ron (Jared Rushton) and Russ (Thomas Wilson Brown). When they are accidentally swept into the trash and left on the side of the street the kids must make their way back through their yard, which has suddenly become frightfully dangerous, if they are to have any hope of getting back home and getting back to their regular size.

Dysfunctional families, marital breakdown, children being separated from parents, disrespectful attitudes and children whose lives are in peril.

Honey I Shrunk the Kids is a science fiction comedy with decent special effects considering it was made in the 1980’s. This is a family film in which families learn to get along and, eventually, appreciate their differences. It is suitable for children over 10 with parental guidance for ages 6-10.

The main messages from this movie are to keep trying, to stick together and to realise that family is not something to take for granted.