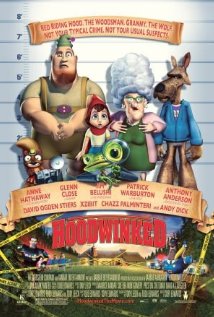 Not recommended under 5 (Some scary scenes; May find it boring)

The story starts with the classic Red-Riding Hood scene, in which Red-Riding Hood walks into Granny’s house, the wolf jumps out at her, Red Riding hood defends herself, Granny jumps out of the cupboard and the woodcutter flies through the window with his axe to save Granny and Red-Riding Hood from the wolf.

A Police Bear turns up and it is revealed that a ‘goody bandit’ has been stealing everyone’s recipes. As Granny still has her recipes, Police Bear decides that either she, Red-Riding Hood, the wolf or the woodcutter must be guilty and is determined to find evidence to prove his theory. Detective Flipper the Frog also arrives and decides that to get to the truth, further investigation is needed. He therefore decides to sit each of them down and they all tell their stories up to that point.

In the meantime, the recipe thief makes off with Granny’s recipe book and everyone pulls together to save the forest from the thief’s dastardly plan.

There is one violent scene in which helpers tie up Red Riding Hood and put her in a cable car full of dynamite.

There are two scenes in this movie that could scare or disturb some children under the age of five:

It is unlikely that the content of this movie would scare or disturb children over the age of five.

The main messages of Hoodwinked are that it is best not to make judgements based on appearances, and that lying can lead to a loss of trust.

This movie could also give parents the opportunity to discuss with their children the importance of getting to know the truth before making judgements.