Hoodwinked Too! Hood versus Evil 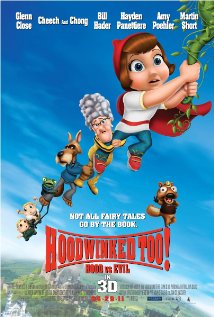 Not recommended under 7, PG to 9 (Violence; Scary scenes)

Hoodwinked Too! opens with the Happy Ever After (HEA) agents the Big Bad Wolf (voice of Patrick Warburton), Granny Puckett (Glen Close) and Twitchy (Cory Edwards) attempting to rescue two children, Hansel (Bill Hader) and Gretel (Amy Poehler), who are being held prisoner by a wicked witch (Joan Cusack). Unfortunately the rescue doesn’t go as planned and the witch escapes with not only Hansel and Gretel, but Granny as well.

Meanwhile, Red Riding Hood (Hayden Panettiere) is off on special assignment training with the Sisterhood of the Kung Fu Bakers, and is about to undertake her final trial when a secret recipe is stolen.

Hoodwinked Too! contains animated violence and accidental harm which are largely portrayed in a comical manner with real life consequences not depicted and characters rarely injured. Children may imitate some of the violence depicted. Examples include:

There are some sexual references and crude humour in this movie, including:

There is some mild coarse language and name calling that children may imitate. Alternate words are substituted for stronger coarse language.  Examples include:

Hoodwinked Too! Hood vs Evil is an animated comedy based on fairytale characters, targeted at primary school aged children and older. It contains scenes that may scare children under seven and violence and language that may be imitated by younger children. It is not as clever and enjoyable for adults as the first Hoodwinked film.

Parents may wish to discuss with younger children the make-believe nature of the animated violence depicted in the film and discuss the real life consequences that would result from this type of violence.