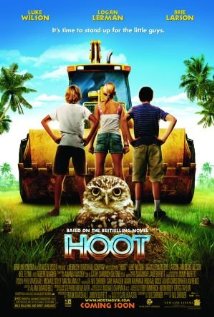 Roy Eberhardt (Logan Lerman) is used to moving all over the country due to his father’s job with the Justice Department. The latest move takes them from his ideal home in Montana to Coconut Grove Florida where once again Roy finds himself the new kid at school.

Straight away, Roy becomes the subject of unwanted attention from Dana (Eric Phillips) the school bully. He also befriends Beatrice The Bear (Brie Larson) and her stepbrother, ‘Mullet Fingers’ (Cody Linley), who has run away from home.

In attempting to help Mullet Fingers Roy gets drawn into a plan to help save a precious piece of Florida coast from a money hungry developer Chuck Muckle (Clark Gregg) and his frustrated foreman Curly Branitt (Tim Blake Nelson). Muckle wants to bulldoze the land to build another Mother Paula’s (Jessica Cauffiel) Pancake House, but the development will destroy the burrowing ground of an endangered species of owl.

In addition to the above-mentioned violent scenes, there in one scene that could scare or disturb children under the age of five. A police officer checks a port-a-potty at the construction site and sees something swimming in the toilet. When he takes a closer look, the snapping jaws of an alligator jump out at him. The scene was suspenseful and the jumping alligator unexpected and as such it could be frightening for some young viewers.

In addition to the above-mentioned violent and scenes, there are some scenes in this movie that could scare or disturb children aged five to eight, including the following:

Some children aged eight to thirteen, particularly those closer to the age of eight years could be disturbed by some of the above mentioned scenes.

Some men have drinks at a golf clubhouse.

There is some mild coarse language in this movie, and quite a bit of name calling, including:

Hoot is a drama based on the book by Carl Hiassen. It is well cast, with a very important message but it has a very predictable plot. It will most likely be best received by an adolescent audience and fans of the book.

The main message is that while development has a place, it also has a price and it is important to look at the future consequences of our present actions because what could be termed important development today could be tomorrow’s ecological disaster.