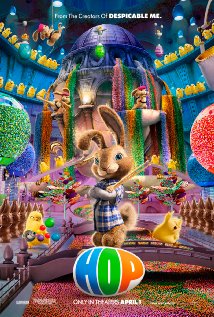 Not suitable under 6; parental guidance to 7 (violence and coarse language)

E.B. (voice of Russell Brand) is set to take over the family business – the very important role of being the Easter Bunny. However, E.B. dreams of playing the drums in a band and, just before he is given the special magical powers of the Easter Bunny, he makes a run for Hollywood.

Meanwhile Fred (James Marsden), an unemployed 20 year old, is struggling to find his passion in life and has been kicked out of the family home.  When he accidentally hits E.B. with his car, Fred thinks that this talking rabbit is the same Easter Bunny that he saw as a young boy. He agrees to help E.B. follow his pop music dreams by taking him to an audition.

The current Easter Bunny (Hugh Laurie) is worried about the whereabouts of his son so sends out his personal guards, the Pink Berets, to bring E.B. home. E.B. and Fred have to dodge the Pink Berets as they travel round Hollywood.

Things become more complicated when Carlos the chick (Hank Azaria), the Easter Bunny’s main helper, plots a takeover with the aim of becoming the ‘Easter Chick’.

Hop contains some violent scenes, including:

There are some coarse language and insults in this movie that young children may imitate, including:

Hop is an animated adventure with an Easter theme. It explores conflicts between the expectations of parents and dreams of children and the consequences that result when these clash.