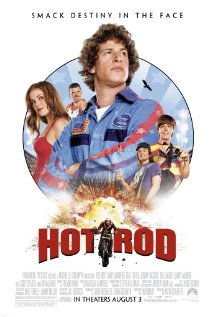 Rod Kimble (Andy Samberg) is a would-be stunt man, whose stunts rival those seen on episodes of Jackass but many of his stunts go badly wrong. Rod is desperate to gain the respect of his abusive stepfather Frank (Ian McShane), and regularly engages Frank in fistfights, believing that if he can beat Frank to a pulp he will prove his manhood. However Rod is the one that gets beaten to a pulp by Frank.
Rod is devastated when he learns that Frank is very sick and will die unless he receives a $50,000 heart transplant, which their insurance will not cover. Frank’s death means that Rod will lose all chance of proving his manhood by beating Frank. To save his stepfather, Rod vows to raise the needed money by hiring himself out as a stunt man.
To assist him in money raising venture, Rob puts together a support team consisting of his stepbrother Kevin (Jorma Taccone), friends Dave (Bill Hader) and Rico (Danny McBride) and Denise (Isla Fisher), the girl next door on whom Rob has a crush. Initially, Rob performs stunts at children’s parties and company functions. Then, in a moment of inspiration, he conceives the ultimate stunt of jumping fifteen school buses on his moped, one bus better than the legendary Evil Knievel. However, when he is laughed at and ridiculed during a public screening of his stunts, Rod disbands his support team and walks away from his life as a stuntman and any chance of raising the needed funds to save his stepfather’s life.
However, Rod’s life is changed when his filmed exploits become extremely popular on various Internet sites, which leads to him being sponsored by a local radio station.

The film contains many scenes of accidental harm, particularly as a result of stunts, and also frequent slapstick and more brutal violence. Examples include:

Most children in this age group are unlikely to be scared by anything in this film, although some may be concerned about the violence between Rod and Frank.

There is some nudity and sexual activity, including

Hot Rod, full of Jackass styled stunts, is an over-the-top comedy send-up of stunt movies. Older teenagers and adults who were teenagers in the 80’s are likely to find this film entertaining, clever and funny.
The main messages from this movie are:

This movie could also give parents the opportunity to discuss the real-life consequences of: