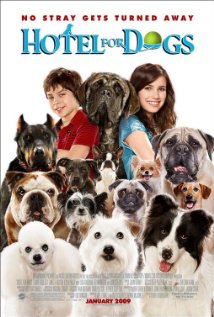 Not recommended under 5, PG to 10 (Scary scenes, Themes)

Based on a novel by Lois Duncan, Hotel for Dogs is the story of two orphaned siblings, Andi (Emma Roberts) and Bruce (Jake T. Austin) who have great difficulty finding foster parents who are willing to look after them both. Their current foster parents, the fifth set in three years, are self absorbed, would be rock stars, Lois (Lisa Kudrow) and Carl (Kevin Dillon) who only took them in because they get an income from it. Andi and Bruce often find themselves in trouble with the law as they think of devious ways to make money. However, they have a very caring social worker, Bernie (Don Cheadle) who always bails them out of trouble. They have adopted a dog, Friday, which isn’t allowed to live with them but they manage to keep his existence a secret.
On one occasion, while trying to run from the police, Andi and Bruce follow Friday into a condemned building where they are surprised to find two more abandoned dogs. They decide to clean the place up and look after all three dogs. Andi is then persuaded by Dave (Johnny Simmons), who works at the local pet shop, to take three more dogs as he can’t keep them at the shop anymore. One thing leads to another and before long, there’s a whole lot of dogs living there causing much mayhem and mess. The very ingenious Bruce however, makes clever gadgets that help with the feeding, cleaning, exercising and entertainment of the dogs. Things all go awry eventually when the local dogcatchers discover where all of their dogs have gone.

It is unlikely that children over the age of thirteen would be disturbed by anything in this movie.

Hotel for Dogs is a family comedy, which is, although highly improbable, quite entertaining.
Values in this movie that parents may wish to reinforce with their children include: