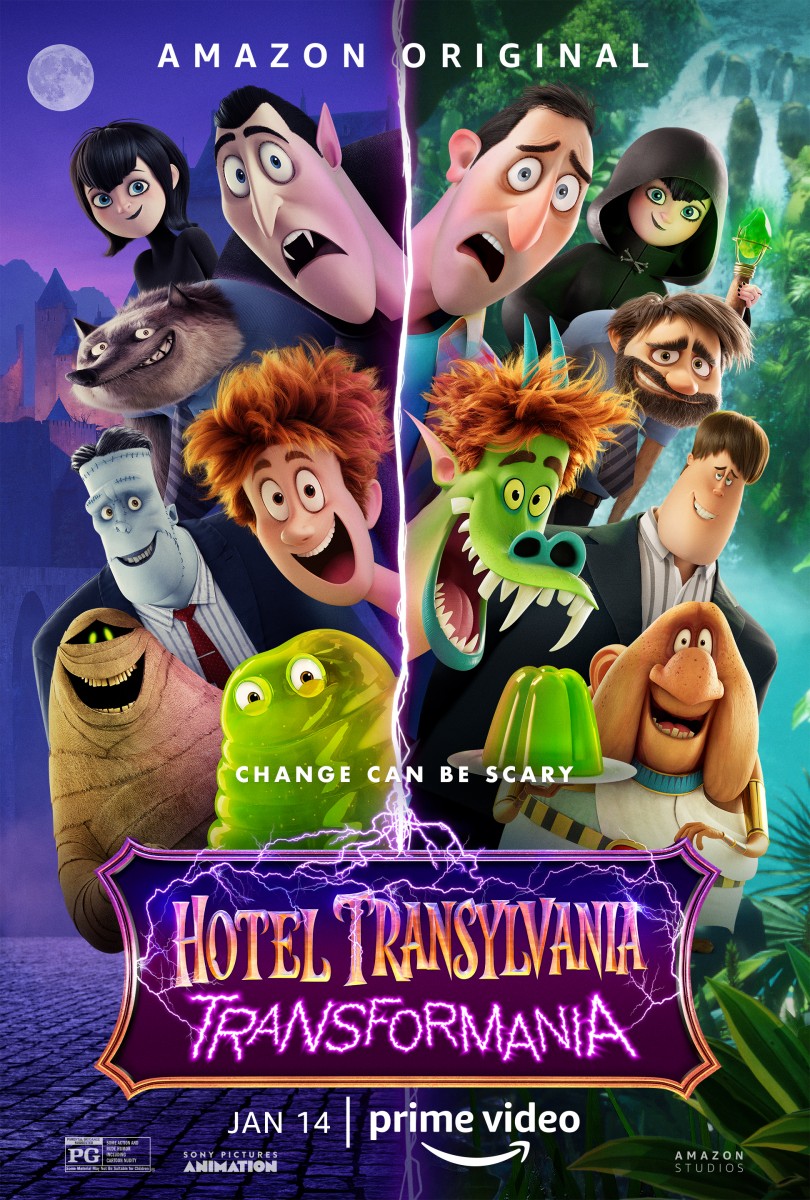 Not suitable under 5; parental guidance to 8 (scary scenes, animated violence)

At the 125th anniversary of the Hotel Transylvania, Dracula (voiced by Brian Hull) prepares to announce his retirement and plan to hand over the hotel to his daughter, Mavis (voiced by Selena Gomez), and her human husband, Johnny (voiced by Andy Samberg). When Johnny accidentally finds out before the announcement and excitedly tells Dracula about all the new things he’ll do with the hotel, Dracula gets cold feet. He lies to Johnny, telling him he can’t inherit the hotel unless he is a monster. Ever the problem solver, Johnny enlists the help of ex-monster hunter, Van Helsing (voiced by Jim Gaffigan), who uses his monster/human transformation ray, to turn him into a dragon monster. When Dracula finds out, he tries to transform Johnny back before Mavis finds out. In the process, Dracula accidentally turns Wayne the Werewolf (voiced by Steve Buscemi), Griffin the invisible man (voiced by David Spade), Murray the Mummy (voiced by Keegan-Michael Key), Frankenstein (voiced by Brad Abrell), and himself, human. During the kerfuffle, the transformation ray breaks, and Johnny and Dracula must venture to South America to fix it. Mavis and Dracula’s partner, Erika (voiced by Kathryn Hahn), quickly work out what has happened and chase after them to help. The group must race against the clock as the transformation ray continues to mutate inside Johnny, causing him to quickly become a frightening, brainless monster.

Hotel Transylvania: Transformania is the fourth instalment in the Hotel Transylvania series. It has a simple plot and slapstick humour, as well as a clear message of acceptance of others and finding the good in life. It will likely entertain young fans of the series and children over 5. Not suitable for children under 5 due to animated violence and scary scenes, and parental guidance is recommended to 8.

The main messages from this movie are to accept others as they are; and to find the good in life, people, and difficult situations.