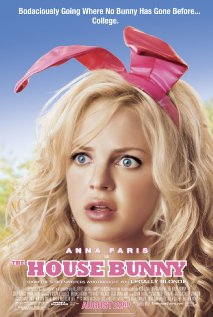 Shelley Darlington (Anna Faris) enjoys her life as a Playboy Bunny until she gets kicked out of the Playboy mansion by a jealous rival. As a homeless person, she runs into a group of college girls and decides to move in and become their housemother. The girls belong to a sorority, Zeta Alpha Zeta, which is in danger of collapsing due to a lack of members. The girls are an odd bunch and quite naïve as far as boys are concerned. This is where Shelley’s expertise comes in and she teaches them all about fashion, make-up and how to attract the opposite sex.
In the meantime, Shelley meets Oliver, (Colin Hanks) but finds all her normal female wiles don’t work with him. This proves to be a learning curve for Shelley who discovers that some boys actually like girls for the person they are on the inside.

There is some violence in this movie, mostly done for comic effect, including:

The House Bunny is a comedy aimed at adolescents. Anna Faris plays the dumb blonde role very well.
The main messages from this movie are that although a sexy image and behaviour might help in the popularity stakes, it’s more important to be yourself and not to try to pretend to be something you are not.