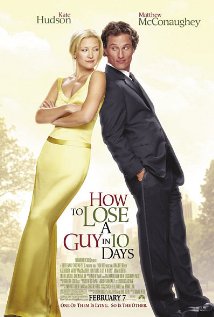 Not recommended under 12 , PG to 13 (Sexual references; Coarse language)

Andie Anderson is a ‘would be’ serious journalist working for a women’s magazine called Composure which publishes articles such as “I lost my virginity now I want it back”. Andie decides to write an article called ‘How to lose a guy in 10 days’ after her friend Michelle was ‘dumped’ by her boyfriend. Andie’s boss wants her to write from experience, therefore not only does she have to write the article but she has to find an unsuspecting guy to test her theories on. She is promised that if she does she’ll be allowed to write something serious. The guy she chooses is an ambitious advertising man called Ben. Ben on the other hand has taken on a bet to prove that he can make any girl fall in love with him and if he does he’ll win a prestigious diamond company’s business. The girl he choses is of course Andie. The result is sometimes hilarious with Andie making all the wrong moves designed to turn a guy off while Ben puts up with all of this in order to win his bet. In the process they end up falling in love but are not prepared for the truth of the whole affair.

There is only one act of violence in the movie when a man takes offence and punches Ben.

There are quite a lot of sexual references in this movie including the following:

There is some sexual activity including:

There is drinking of wine and beer in a bar. Ben and his friends smoke cigars while playing poker.

There is frequent coarse language including the following words:

They als play a card game with Ben’s family called ‘Bullshit’ where this word is repeated many times.

The take home message from this film would be that if you don’t care about someone else’s feelings you could end up getting hurt yourself.

This film is about two ruthless people who value their career more than their relationships with other people. Therefore there are no values in this film that parents would like to encourage but several that they might like to discourage including: