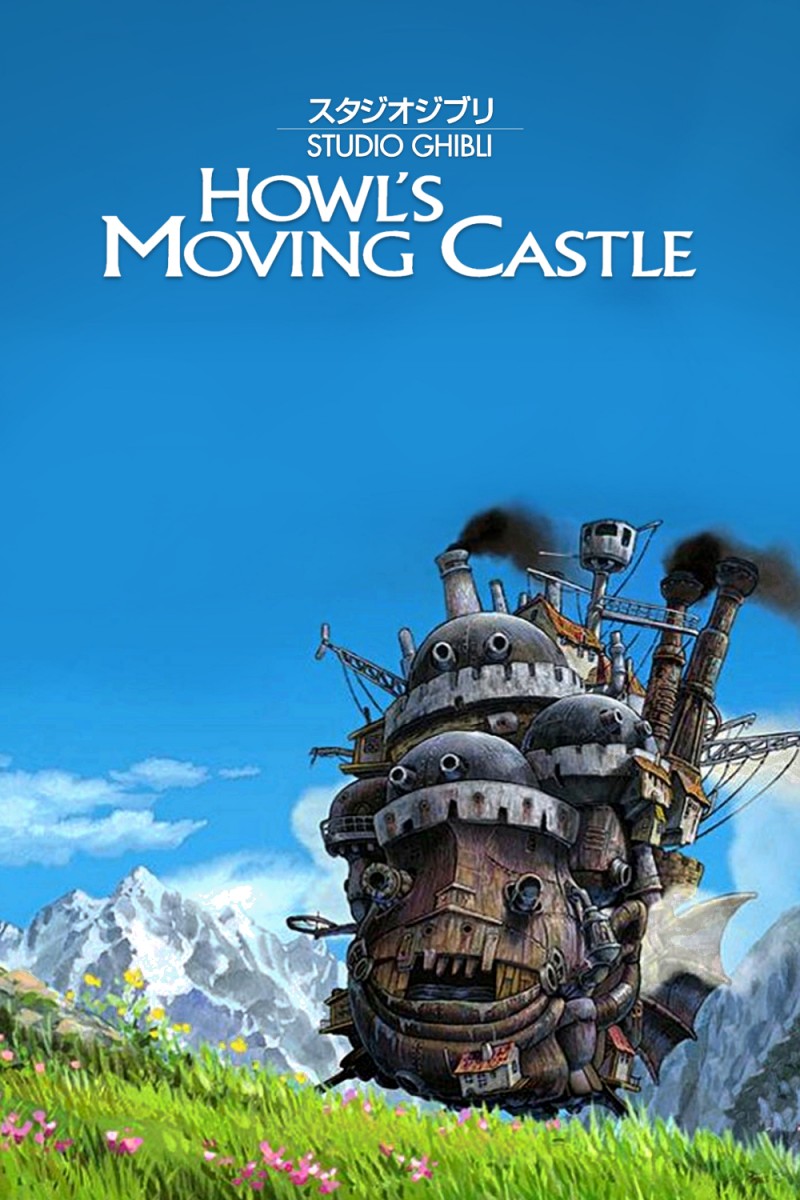 Not suitable under 8; parental guidance to 12 (violence, scary scenes)

Howl’s Moving Castle is a Studio Ghibli animation, released in 2004 and based upon the book of the same name by British Author, Dianna Wynne Jones. The film is set in the past, loosely in the first half of last century, in a European style town that is at war with a neighbouring Kingdom. Sophie (young voice of Emily Mortimer and old voice of Jean Simmons) is an earnest and kind teenage girl working in a hat store. She believes herself to be plain and not worthy of attention, not like her more glamorous sister, Lettie. One day, as Sophie is harassed on the street by some thuggish young soldiers, an elusive and attractive young man intercepts them and leads Sophie away safely. It turns out that the young man is Howl, a notorious Wizard (voice of Christian Bale). That very same evening, as she returns to her hat shop, Sophie encounters The Witch of the Waste (voice of Lauren Bacall) who casts a spell upon her, turning her into an old crone. In horror, Sophie leaves the town to try and find someone to help her break the curse and return her youth to her. Whilst roaming the countryside, she comes across a friendly scarecrow who leads her to the infamous Howl’s Moving Castle – a large and surreal steam-punk-style vehicle which roams around the land on large mechanical chicken legs. It is where the Wizard Howl lives, along with his apprentice Markl (voice of Josh Hutcherson) and a comical fire demon called ‘Calcifer’ (voice of Billy Crystal) who is spellbound to stay in the castle and keep it moving and warm. Sophie lets herself into the castle uninvited and makes a pact with the demon Calcifer that she will help him become free of Howl if he helps break the curse on her. In the meantime, she nominates herself as Howl’s cleaning lady. She starts to learn all about Howl; how he became a wizard, how he transforms into a giant bird, and how he has been summoned by the King to fight in the war. Sophie finds herself falling in love with the mysterious Wizard. He enlists her help, asking her to speak to the King’s adviser on his behalf. As the war intensifies and bombs start dropping on Sophie’s town, Howl does his best to protect them all and Sophie is driven to free them all from the curses and spells that bind them all together.

Howl’s Moving Castle is a brilliant flight of imaginative fantasy. The hand drawn animation is visually spectacular and the imagery teeters between nightmarish horror and haunting beauty. There are powerful philosophical messages about pacifism, youth and beauty, and love and compassion. This film is best suited to older children who are able to maintain attention to the complex plot – and while parental guidance is recommended due to violence and scary scenes, the film is likely to appeal most to children between 8 and 12.

The main messages from this movie are that youth and beauty are not necessarily a valuable blessing bestowed on the young – they can also be a harsh burden and ageing can bring peace and relief. The film also has a strong anti-war message.