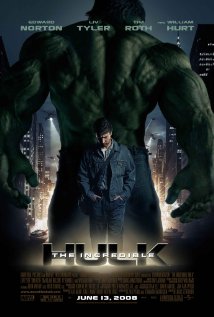 Not recommended under 13 (Viol. Themes.)

The film begins with David Banner, conducting genetic manipulation experiments in the seventies for the US military. Frustrated with military red tape, David Banner injects himself with gene altering serum, with the resulting mutated genes being passed onto his son Bruce (Hulk). When the miliary realises that David Banner is conducting prohibited experiments on humans, his research is suspended. Unable to cope with the shutdown, David Banner destroys the military base and accidentally kills his wife leaving the four-year old Bruce Banner to be raised by adoptive parents.

Following the destruction of the military base, the film goes forward thirty years to find Bruce Banner, a brilliant scientist creating gene manipulation technology similar to that of his, assumed dead, father. While conducting experimental research, Bruce is exposed to what would normally be a lethal dose of gamma radiation, but he survives the ordeal unscathed, or so it appears. However, the gamma radiation sets off a change reaction within Bruce, which finally results in the transformation of Bruce Banner into the Hulk and the destruction of Bruce’s lab by the enraged Hulk.

The following day sees the US military arrive at Bruce’s house with the intention of arresting him. However Bruce, after some altercation with military personnel, transforms into the Hulk and makes his escape. The Hulk heads straight for Betty’s house, arriving just in the nick of time to save Betty from being torn apart by three huge, vicious mutated dogs. The following morning Bruce, now back to his old self, on answering a knock at the door is shot in the arm with a tranquilliser dart, packed up by the military and flown to a military base in the middle of the desert. While attempting to conduct experiments on the Hulk, the military misjudge his capabilities and the Hulk’s escapes. The Hulk is pursued across the desert by tanks, helicopters and jets, all of which are destroyed by the Hulk without a single loss of human life. The Hulk mountain jumps all the way to San Francisco and the Golden Gate Bridge where he is again attacked by the might of the military.

After finally being subdued by Betty in the street of San Francisco, the Hulk transforms back to the mild mannered Bruce Banner. Imprisoned by the military, Bruce is reunited with his father, for one last visit, however, during the visit Bruce’s father transforms into a mutation of worse proportions than the Hulk and the pair end up fighting it out at a deserted lake. In the end, the military have the last say by firing a nuclear missile at the pair supposedly destroying both the Hulk and his father.

Violence is featured throughout the film. While violence is not specifically glamorised, it is presented as the main means of either achieving the desired goal, or solving confrontation. The only exception to this was the heroine of the film Betty, who continuously argued for peaceful solutions.

The violence presented through out the film was portrayed by three separate parties:

The use of violence was totally dominated by male characters with the most helpless and innocent victim being the film’s heroine Betty.

There are numerous visual images presented throughout which are capable of frightening children under five years including:

Children in this age group are also likely to be scared by the scenes described above.

Children in this age group are also likely to be scared by the scenes described above.

In general early adolescents should be capable of acknowledging the visual images listed above as fictional. However, the computer generated images involving the attack of the three mutated dogs is presented in a very realistic manner, and the attack is particularly vicious. In particular these visual images may leave a lasting impression that some early adolescents may find disturbing.

The Hulk contained one scene involving alcohol consumption. This involved Betty and Bruce drinking a beer together after work. Reference was made to the fact that only one beer was consumed by each and that the alcohol had affected Betty’s behaviour.

The main take home theme is that of good versus evil: the Hulk is good and the evil are the mad scientists and the military.

Parents may wish to discuss how in the film, the real bad guy is not necessarily that which appears as a monster, such as the Hulk, but that which appears handsome, respectable and safe, such as scientists and the military. Be aware that very young children will not be able to understand this visual anomaly.

Parents may also wish to discuss the male dominated and gender unequal nature of the film and that this is not a true representation of reality.