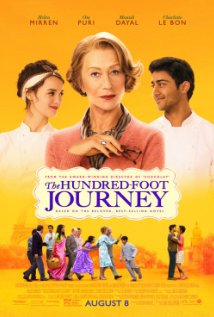 Papa Kadam (Om Puri), after losing his wife and the family restaurant to a devastating fire, decides to leave his home in Mumbai and take his family to seek greener pastures in the Europe.  While travelling across Europe, Papa Kadam stumbles across a dilapidated restaurant in the south of France and decides it will make the perfect venue for the new Kadam family restaurant, Maison Mumbai.

Fortunately the fiery confrontation between the two restaurant owners begins to change when Papa Kadam’s son Hassan (Mannish Daval), who is a culinary genius, develops a romantic friendship with Madame Mallory’s sous-chef Marguerite (Charlotte Le Bon). Marguerite lends Hassan several French cook books which Hassan quickly masters and he then uses his newly acquired culinary skills in an attempt to win over the stony Madame Mallory.

It is only when local bigots set fire to Maison Mumbai in an attempt to run Papa Kadam and his family out of town, that Madame Mallory is outraged, has a change of heart, and begins forming a friendship with the Kadams.

Restaurants and cooking; bigotry and racism; death of a parent/family member

In addition to the above-mentioned violent scenes and scary visual images, there are some scenes in this movie that could scare or disturb children aged under eight, including the following:

There is some hugging, passionate dancing and kissing

The Hundred-Foot Journey, based on a novel by Richard C. Morais, is a romantic comedy about cultural opposites learning to coexist. The film targets older adolescents and adults, particularly those who like films about cooking and good food. The film has a great cast and spectacular views of the French countryside. The story is likely to lack interest for younger children and has some violent scenes that are quite scary.