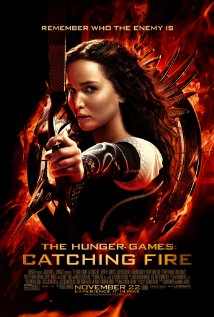 After winning the 74th annual Hunger Games, Katniss Everdeen (Jennifer Lawrence) and Peeta Mellark (Josh Hutcherson) have returned home to District 12 to spend some time with family and friends including Katniss’ boyfriend, Gale Hawthorne (Liam Hemsworth). Unfortunately, Katniss and Peeta’s time at home is short lived because they are required to embark on a victory tour of Panem’s districts having to pretend they are in a passionate relationship.

But the tour does not go as anticipated. Panem’s downtrodden masses see Katniss and Peeta’s victory over the 74th Hunger Games as a sign of hope, which sows seeds of rebellion. Fearing an uprising by the masses, President Snow (Donald Sutherland) decides to quash all thoughts of hope and rebellion by doing away with Katniss, Peeta and all previous Hunger Games champions.

Luckily for Katniss and Peeta, their Hunger Games mentor Haymitch Abernathy (Woody Harrelson) has managed to sway several contestants to their side. The unexpected result of teaming Katniss and Peeta with their new found allies sets the scene for the final instalment in the Hunger Games trilogy of films.

Teenagers forced to fight to the death in killing games; totalitarian government; oppression and rebellion; self-sacrifice

The film contains some intense sequences of violence with some graphic death, blood and gore and injury. Examples including:

Ina addition to the above-mentioned scenes there are a number of scenes which will disturb children in this age group, including:

The above scenes will also disturb children in this age group

None of concern in the film but associated merchandise being marketed to young children.

The film contains some partial nudity and low-level sexual activity. Examples include:

The film includes some coarse language. Examples include:

The Hunger Games: Catching fire is an action adventure targeting an older adolescent audience and fans of the Hunger Games series of novels. Catching Fire is a sequel to the first Hunger Games film and follows a similar storyline with the film’s two heroes inspiring the masses to rebel while being forced to compete in a fight to the death. As with the previous film, violence and disturbing themes and scenes make the film unsuitable for tweens and younger teens who may have read the books or be attracted by the film’s marketing.

Values in this movie that parents may wish to reinforce with their children include courage and self-sacrifice.