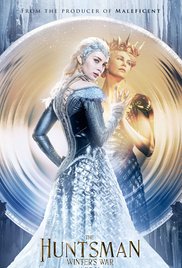 Not recommended under 13, parental guidance strongly recommended 13 to 15 (Violence; Disturbing scenes and themes)

The Huntsman: Winter’s War begins as a prequel to the 2012 film Snow White and the Huntsman. Queen Ravenna (Charlize Theron) uses evil magic to kill the king and then steal his kingdom which she then rules with her sister Freya (Emily Blunt). Unlike Ravenna, Freya has yet to show any sign of magical talent. When a personal tragedy results in Freya discovering her magical ability, she is transformed into the Ice Queen, leaves her sister’s kingdom and builds her own kingdom in the north.

Freya invades the lands surrounding her kingdom killing the enemy armies and capturing the children who she trains as her huntsmen. Two of the young captives are Eric and Sara who soon become Freya’s best huntsmen. Seven year pass and Eric (Chris Hemsworth) and Sara (Jessica Chastain) are now adults and, against the Queen's laws, have fallen in love with each other. Eric and Sara decide to escape the Ice Queen’s rule and live their own lives, but the Ice Queen learn of their plans to escape and uses her magic to fool each of them into thinking the other was lost.

More years pass and we learn that Snow White has defeated Ravenna and that the magic mirror has been lost. The Ice Queen has learnt of the loss of the mirror and has sent her own huntsmen to find it and return it to her. Meanwhile Eric has been ordered by the king to find the mirror before it can fall into the wrong hands.

Fairy tales; magic; the murder of a child; the kidnapping of children; training children as soldiers

The Huntsman: Winter’s war is an action fantasy which is likely to appeal to fans of the 2012 film, Snow White and the Huntsman. The film is likely to appeal to teenagers and even tweens but has many violent and scary scenes, and confronting themes which include children as soldiers and children being kidnapped and killed. It is definitely not recommended for viewers under 13, with parental guidance recommended for 13 to 15 year olds.

The main message from this movie is that love makes us stronger and can conquer all.