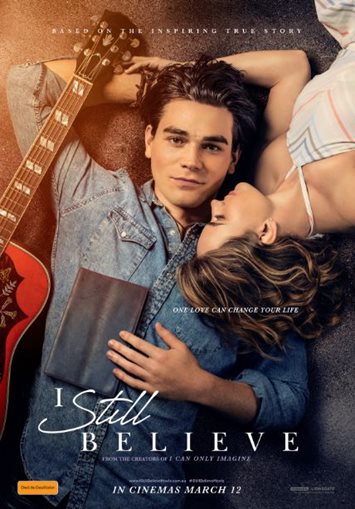 Not suitable under 10; parental guidance to 13 (disturbing scenes and themes)

I Still Believe is based on a true story about Christian music singer Jeremy Camp (J. K. Apa) and his first wife Melissa (Britt Robertson). Jeremy was raised by his father, Tom (Gary Sinise), a pastor at Harvest Chapel, La Fayette, Indiana and his mother Terry (Shania Twain). Jeremy left home to attend the Calvary Chapel Bible College in California where he met and fell in love with Melissa.

It wasn't long after they met that Melissa was diagnosed with stomach cancer which then spread to her liver. Following surgery and chemotherapy Jeremy and Melissa married but shortly after the cancer returned to her ovaries. Jeremy wrote the song I Still Believe after her death.

I Still Believe is a faith-based movie about love, loss and grief. It is a very moving story, with the question of faith put to the greatest test, likely to appeal to fans of Jeremy Camp and other Christian followers. Due to its sad themes on death and dying it isn't suitable for children under 10 and parental guidance is recommended for children aged 10 – 13.

The main messages from this movie are that faith will help you overcome all obstacles in life and that there is hope after despair.