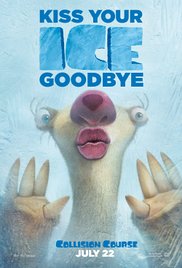 Parental guidance recommended under 6 due to scary scenes and themes

Ice Age: Collision course, an animated adventure film, is the fifth instalment of the Ice Age movie series. The film begins as Scrat (Chris Wedge) attempts to chase an acorn he discovers. He is eventually catapulted outside Earth, where he unintentionally sets in motion a dangerous series of events that threaten to destroy the entire planet. There is an asteroid catapulting towards earth, and the team of friends, including Manny (Ray Romano), Ellie (Queen Latifah), Sid (John Leguizamo), Diego (Denis Leary), and Buck (Simon Pegg), are forced to figure out how to stop it. Buck ultimately comes up with a plan that involves journeying to the valley where the meteors have been landing and creating a magnetic space that may potentially divert the impending asteroid.

In addition to the central plot, the movie involves individual sub-plots related to several of the main characters. Optimistic Sid is still on a quest to find his one true love, whilst Manny is a parent struggling with his daughter growing up and getting married.

Nothing in the movie, but plenty of associated merchandise being marketed to children

There is some coarse language that children might imitate, including:

Ice Age: Collision course, the 5th film in the Ice Age series, is a light-hearted family film that centres on an unlikely group of individuals tasked with saving the world. It is likely to be popular with fans of the previous films and to attract some new young viewers. Parental guidance is recommended for children under 6 due to some scary scenes and themes.

With impending disaster in the form of an asteroid rocketing towards Earth, the movie’s plot highlights the importance of being able to work together as a team in order to achieve common goals. It centres on the supportive nature of friendships, and the positive outcomes of having people around who can be relied upon during times of stress or crisis. The movie also presents the characters as individuals who do not always take life, or themselves, too seriously – despite facing danger and life-threatening events.