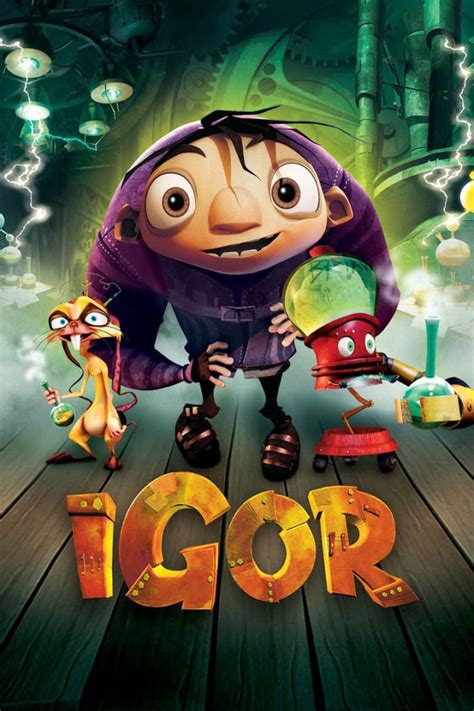 Not recommended under 8, PG to 13 due to violence and disturbing scenes.

The unfortunate kingdom of Malaria has been afflicted with perpetual storms and rain for years. King Malbert (voice of Jay Leno) has combated with this adversity by making Malaria the centre for Evil Scientists and their evil inventions. Their evil creations are used to blackmail the rest of world, who pay large amounts of money to stop their release.

Dr Glickenstein (John Cleese), one of Malaria’s most famous but inept evil scientists, is working on his latest entry for the Evil Science Fair, when he is accidentally killed. His oppressed but clever assistant, Igor the hunchback (John Cusack) decides to use this opportunity to live out his dream of being an evil scientist. With his friends, Scamper the immortal rabbit (Steve Buscemi) and less than brainy Brain (Sean Hayes), Igor creates a living evil monster, Eva (Molly Shannon). Unfortunately, Eva’s ‘evil bone’ doesn’t work, and after a series of mishaps, she in fact thinks she’s an actress.

Further troubles arise when Dr Schadenfreude (Eddie Izzard), a rival evil scientist, and his shape-shifting girlfriend Jacqueline (Jennifer Coolidge) also plot to steal Igor’s invention to win the competition and overthrow King Malbert. Igor, with the help of his friends, must try to convince Eva to be ‘evil’ for the competition to realise his dreams, survive threats to his life from the king and Dr Schadenfreude, and expose the biggest cover up the kingdom has known.

Igor is a light-hearted animated comedy about good and evil. Young children may find some scenes scary and the themes and aspects of the dialogue complex. Older children will enjoy the amusing ‘big’ characters and slapstick humour, and there is much for adults to enjoy in the clever dialogue.