Imaginarium of Dr Parnassus, The 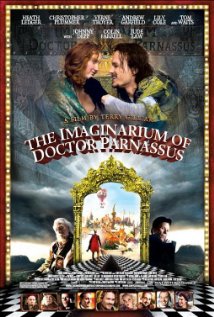 Centuries before this story begins Dr. Parnassus (Christopher Plummer) won a bet with the Devil (Tom Waits) and, as a reward, was given immortality. This suited him just fine until he fell in love with a beautiful young woman. In order to win her heart he made another wager with the Devil and was given youth in exchange for any child that might be born to the couple. The Devil stipulated that from the age of sixteen that child would belong to him.

When, at the age of sixty, the love of his life dies giving birth to a daughter, Valentina (Lily Cole), Dr. Parnassus realizes the extent of what he has done. As the eve of her 16th birthday draws nearer he finds himself making another desperate wager with the devil in order to gain her freedom.

With the help of his travelling “Imaginarium”, his faithful companion Percy (Verne Troyer) and Anton (Andrew Garfield) a young actor in love with Valentina, Dr Parnassus sets about the task of saving souls, trying to claim five before the devil does. The group are helped along the way by Tony, a corrupt philanthropist whom they save after the Russian mafia tries to hang him (Tony is played predominately by Heath Ledger, but also in a series of transformations within the Imaginarium by Johnny Depp, Jude Law and Colin Farrell).

A desperate race of good versus evil ensues as Dr Parnassus and his friends try to win against all odds while unsuspecting volunteers are given a glimpse of the alternate realities that lie within the Imaginarium.

Making wagers with the Devil; gambling with a child’s life; alcoholism

Children in this age group are also very likely to be disturbed by some of the scenes described above and the theme of making wagers with the Devil, particularly when they threaten the life of a child.

Children in this age group may also be disturbed by some of the scenes described above and the theme of making wagers with the Devil, particularly when they threaten the life of a child.

Younger children in this age group may also be disturbed by the theme of threatening the life of a child by making a wager with the Devil.

The Imaginarium of Dr Parnassus is a fantasy adventure film with numerous plot twists and special effects, leaving the viewer with much to think about long after the end credits have rolled. Disturbing scenes and themes make it unsuitable for younger viewers.

The main message from this movie is that we all make our own choices and choose our own destinies.