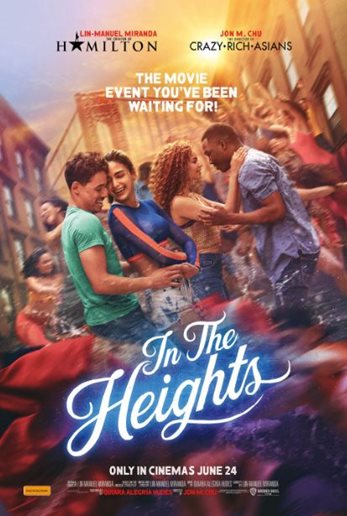 Not suitable under 12; parental guidance to 14 (language, sexual references, themes)

Usnavi (Anthony Ramos) tells the story of Washington Heights – a close knit, largely Hispanic, neighbourhood in New York – to a small group of children, drawing them in with whispers of sueñitos (little dreams) and streets made of music. For this is a story of dreams... The dream of each immigrant family leaving their homeland, hoping to find a better life in New York. The dreams of parents for their children, such as the hardworking Mr. Rosario (Jimmy Smits) who sacrifices everything so that his academically gifted daughter can have everything he never did; so that she can go out into the world and show people that the Latino community is just as talented and brilliant as any other.

This is the story of Mr Rosario’s daughter Nina (Leslie Grace), who briefly falters, feeling the weight of her entire community resting on her shoulders but who, in the midst of all the pressure and expectation, finds a way to represent her people and to help those who have fewer rights and opportunities than she herself ever did. It is the story of Vanessa (Melissa Barrera), a young lady who works at the local beauty salon and who dreams of designing clothes and living in a better neighbourhood. But mostly it’s the story of Usnavi, who dreams of returning to the Dominican Republic to reopen the little bar that his father used to run; and it is the story of Abuela Claudia (Olga Merediz), the childless matriarch of the neighbourhood who adopts Usnavi as her own, who teaches the younger generations to believe in themselves and to believe in the power of their dreams. Despite the hardships and struggles they face, Abuela Claudia helps them take pride in the small details of life, and in their little cultural differences, and she reminds them to shine a light on these and show the world who they truly are.

In the Heights is a musical drama with a wonderful cast and musical score, and excellent choreography. The film outlines the struggles that lie within each of us and reminds us that no matter the challenges we face, we must not give up on our dreams. The film will be best enjoyed by older audiences and musical fans.

The main messages from this movie are that communities are not powerless, they are powerful; and that it is the little details within each group that will ultimately show the world they are not invisible.