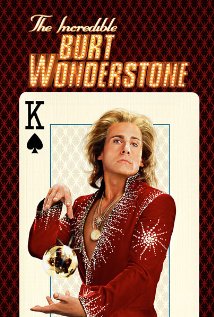 Not recommended under 15 (Violence, Disturbing scenes and sexual references)

As a young child, Burt Wonderstone is a loner who is bullied by his peers at school. Burt’s life changes when he is given a ‘Rance Holloway’ magic kit for his birthday, and develops a passion for performing magic tricks, which he believes will make him more popular. Burt teams up with another outcast, Anton Marvelton, who also has a passion for magic tricks and the two young magicians form a partnership.

Thirty years later Burt (Steve Carell) and Anton (Steve Buscemi) are aging magician superstars, who perform in their own theatre in a Las Vegas Hotel. Unfortunately their act is outdated and they are threatened by the new magician on the block “Street Magician” Steve Gray (Jim Carrey). Gray has his own internet show called “Mind Rapist” and performs a very different type of magic involving outrageous stunts. Following dwindling audience numbers hotel owner Doug Munny (James Gandolfini) gives Burt and Anton an ultimatum to change with the times and modernise their show for a younger audience or be fired. Unfortunately, Burt is unable to cope with the challenge of changing the act and the partnership ends.

Bert’s attempt to go solo fails miserably and he quickly becomes destitute. Luckily, Burt’s life takes a turn for the better when he lands a job entertaining residents in an “old folks” home and runs into his childhood hero Rance Holloway (Alan Arkin).

Magic; self mutilation; change and ageing

The film contains scenes of schoolyard bullying, some slapstick violence, reckless stunts and self mutilation. Examples include:

Younger children in this age group may also likely be disturbed by some of the above-mentioned violent and scary scenes.

The film contains a number of sexual references and innuendoes throughout. Examples include:

The Incredible Burt Wonderstone is a comedy targeting an older adolescent and adult audience but lacking both real comedy and character development. Tweens and teens might be attracted by the title and the story about magicians, so parents should be aware that it is not recommended for children under 15 because of violence, including bullying and self-mutilation, and sexual references. The scenes involving self mutilation, real or otherwise, are particularly disturbing and younger children may try to imitate both some of  the stunts and the coarse language. Parents of older children who see the film may wish to discuss the appropriateness of Burt’s attitude to women.

The main positive messages from this movie are: