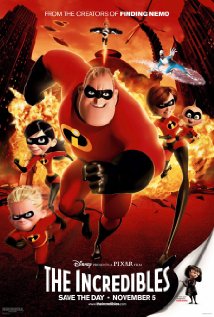 This film tells the tale of traditional comic-book superhero Mr. Incredible, who leads the perfect life rescuing the innocent and helping people in need. However, one day, a number of simple, crime fighting mishaps result in the government placing a ban on the use of superhuman powers and forcing all superheroes to enter a relocation program, where they are given new identities and helped to “fit in”.

Fifteen years elapse in which time Mr. Incredible marries his superhero love Elastigirl with whom he has three children all with superhuman powers: a wild son Dash, who can outrun the wind, a shy daughter Violet who can create force fields and become invisible and a baby son Jack Jack, who appears “normal” enough, but has a few surprises in store for everyone. Meanwhile Mr. Incredible has become completely disenchanted with his life as an insurance claim processor and disengages from his family. Things appear to be getting worse all around until Mr. Incredible gets an offer too good to refuse and finds himself returning to the life he once loved.

Unfortunately, he learns that this was a trap set by the evil super villain Syndrome to rid the world of superheroes once and for all. Consequently Mr Incredible and the rest of his family are forced to use the gifts they have tried to hide in order to restore peace and save humanity.

This film contains frequent use of violence, including:

Aside from some of the already mentioned violent scenes there are another few scenes that may be frightening for younger viewers.

Children in this age group may also be scared or disturbed by scenes in this film.

The above-mentioned scenes may frighten some children between the ages of eight and thirteen.

Children over the age of 13 are unlikely to be frightened by this film.

Mr. and Mrs. Incredible had a habit of butt slapping and butt pinching.

There was a sub-plot running throughout the film that led Elastigirl to believe that Mr. Incredible was having an affair, the implications of which would have gone over the heads of most children.

The movie’s main message is that everyone has special gifts and talents and that rather than hiding these gifts and trying to fit in and be like everyone else people should be true to themselves and be happy with who they are.

Parents may wish to take the opportunity to discuss with their children the qualities of power, courage, obedience, justice and what it means to be “normal”.