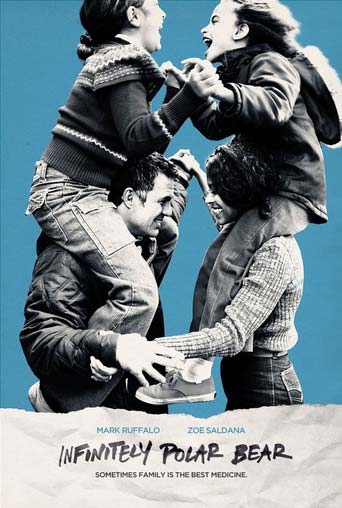 Not recommended under 14; Parental guidance recommended 14 to 15 (Disturbing themes, some violence and coarse language)

This film is set in Boston in the late 1970’s. Cameron Stuart’s (Mark Ruffalo) life is falling apart. A diagnosed manic-depressive (having bipolar disorder), Cameron gets fired from his latest job and has a breakdown. His wife Maggie (Zoe Saldana) tries to escape with their two daughters Amelie (Imogene Wolodarsky) and Faith (Ashley Aufderheide) but Cameron runs after them dressed only in his underpants and removes the carburettor from the car to prevent them leaving. Amelie and Faith watch from their window as their father is taken away by the police.

Cameron spends some time in a half-way house before he is allowed to return home. Maggie wants the family to be reunited once Cameron is better, but insists they remain separated until then. When Cameron appears to be on the mend, Maggie decides to get an MBA so that she can support the family but this requires her moving to New York. Maggie thinks it will be good for Cameron to have the responsibility of the two girls during the week and she intends to come home at the weekends.

Unfortunately Cameron has problems even looking after himself, and Amelie and Faith have to do a lot of growing up to in order look after themselves and their father.

Children in this age group would also be disturbed the above mentioned scenes and by:

Infinitely Polar Bear is based on the true story of a childhood affected by bi-polar disorder, as seen from an adult perspective. It does have some light moments, but not enough to relieve the intensity of the story. It is likely to be quite disturbing for children and young teens and is more suited to older teens and adults. Parents are warned not to be misled by the title and picture of a happy family on the advertising posters.

The main messages from this movie are that children are capable of loving their parents despite their faults and that all human beings need to be loved and cared for.

Values in this movie that parents may wish to reinforce with their children include the importance of family and caring for others in your family.