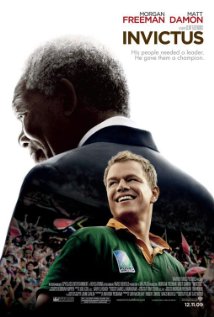 Lacks interest and not recommended under 8, PG to 12 (Violence, coarse language)

To further his cause, Precedent Mandela enlists the help of the Springbok’s captain Francois Pienaar (Matt Damon).

Violence in this film includes news images of rioting and on-field sports violence. Examples include:

The film contains coarse language and name calling. Examples include:

Invictus is a historical drama suited to an audience 13 years and older. It is thought-provoking and entertaining, but lacks interest for younger viewers. The film’s two lead actors, Morgan Freeman and Matt Damon provide strong believable performances.

The main messages from this movie are that