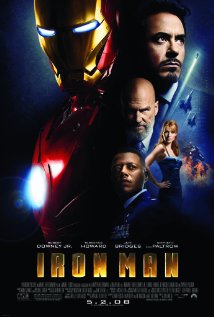 Not recommended for children under 13 years of age, parental guidance recommended 13-15 (Violence, disturbing scenes and themes).

Tony Stark (Robert Downer, Jr.) is a billionaire industrialist, whose company Stark Enterprises manufactures military weapons. After demonstrating a new and devastating weapon in the Middle East, Tony is ambushed and attacked by terrorists armed with weapons made by his company. He receives a bad chest injury and wakes up in a cave with an electro-magnet wired into his chest. Tony has a chest full of shrapnel, and to stop the shrapnel from reaching his heart, he must remain wired up to a car battery and magnet. The terrorists holding Tony demand that he build a missile for them.

Rather than building the missile Tony, helped by a fellow prisoner Yinsen (Shaun Toub), builds a small chest implant which has enough power to keep the shrapnel away from Tony’s heart for fifty life times. In the next step in his transition into Iron Man, Tony builds an iron suit complete with flamethrowers and rocket-propelled boots. He dons the suit and breaks out of his prison, but at the cost of Yinsen’s life.

Tony returns to the USA where he re-evaluates his beliefs and life, and announces that Stark Enterprises will cease making weapons. Obadiah Stane (Jeff Bridges), long time family friend and member of the Stake Enterprise’s board of directors is less than impressed with the announcement and takes covert steps to “lock” Tony out of the company. Tony makes a new and improved Iron Man suit and flies off to the Middle East to seek revenge against those who abducted and imprisoned him. He finds them attacking innocent civilians, defeats them and destroys all of their weapons.

Back at home, Tony/Iron man suspects Obadiah of selling weapons to terrorists, and asks his close friend and assistant Pepper Pots (Gwyneth Paltrow) to help him. Pepper finds proof that Obadiah was responsible for the terrorist attack on Tony. Together, Tony/Iron Man and Pepper work to defeat Obadiah.

Iron Man contains frequent intense action violence, some of which is brutal. Examples include:

Iron Man is a well-acted superhero film, with excellent special effects, in which the characters face moral dilemmas of some substance. It is likely to appeal to older adolescents and adults.

Values that parents may wish to reinforce with their children include altruism and the importance of friendship.

Parents may also wish to discuss with older children attitudes and behaviours, and their real-life consequences, such as: