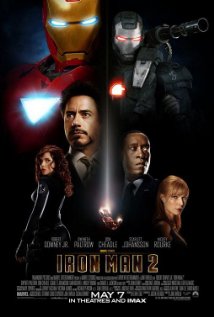 Not recommended under 12, PG to 15 (Violence, scary scenes)

In a rundown apartment building in Moscow, Ivan Vanko (Mickey Rourke) screams out in murderous rage after watching his father die in bed. Next, we see Ivan constructing his own Iron Man suit complete with “power whips”. We learn that Ivan’s father was responsible for developing the plans of the original arc reactor which was taken over by Tony Stark’s father enabling Tony Stark (Robert Downey Jr) to create the original Iron Man suit. Instead of reaping the rewards of his invention, Ivan’s father was deported back to Russia.

Six month later we find that all is not running smoothly for Tony Stark. He is slowly being poisoned to death by the arc reactor used to power his Iron Man suit, while the U.S. Government is pressuring him to hand over his suit to the military. The military team up with Justin Hammer (Sam Rockwell), an industrialist whose aim in life is to destroy Stark, to develop their own suit. Meanwhile, Ivan Vanko re-enters the picture as ‘Whiplash’ and attacks Tony Stark during the French Grand Prix, but is defeated and imprisoned.

Unsuccessful in his attempts to create an Iron Man suit, Hammer orchestrates Ivan’s escape from prison, believing Ivan will aid him in the making of the suit. However, Ivan has his own agenda and, rather than building an Iron Man suit, builds his own army of Iron Man clones.

Iron Man 2 contains sequences of intense, stylised action violence throughout with minimal depiction of blood and gore. Examples include:

Apart from the violence described above, children in this age group are unlikely to be disturbed by anything in this film.

Iron Man 2 contains a number of covert sexual references and innuendo. Examples include:

Iron Man 2, follow-up to the film Iron Man, is a superhero action adventure based upon Marvel comics characters. The film targets an adolescent male audience. Despite some good performances, the film falls short in terms of providing stimulating adult entertainment and, at just over two hours in length, is a little longer than needed.

The main message from this movie is that technology should be used for the greater good of humanity rather than individual personal gain.

Values in this movie that parents may wish to reinforce with their children include self sacrifice. Tony Stark as Iron Man makes numerous sacrifices, including risking his life to save others and humanity in general. A number of Stark’s close friends also made similar sacrifices to the benefit of Stark and others.