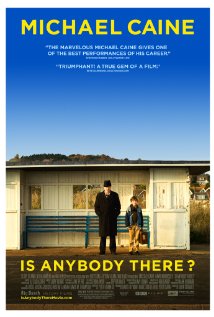 Not suitable under 13, not recommended under 15 (Themes, disturbing scenes, coarse language)

Edward (Bill Milner) is a 10 year old boy who lives with his mother (Anne-Marie Duff) and father (David Morrissey) in the ramshackle nursing home that they run. He is obsessed with the afterlife and desperately wants to know what happens after you die. He has taken to placing tape recorders in the rooms of the residents and spends hours listening to and analysing their last breaths. He tries many varied ways to contact the dead, but all to no avail.
When Clarence (Michael Caine) arrives at the home, after a long life on the road as a magician, he insists that it is just for a little while and that he doesn’t need to be cared for. Indeed, compared to the other patients, who shake constantly, live in alternate realities or can barely speak, Clarence appears to be the last person who needs to be in such a place. But looks can be deceiving. After Clarence attempts to commit suicide, Edward and Clarence strike up an unlikely friendship. Both are unhappy with their lives and are largely misunderstood. But they learn to understand each other. Edward gives Clarence hope about the afterlife and Clarence helps Edward learn to live life in the present as opposed to focussing only on life after death.

Children in this age group may be disturbed by the themes of death and suicide.

The main message from this movie is that life, no matter how long you live, is short and that you should make the most of living it to the fullest.
Values in this movie that parents may wish to reinforce with their children include: