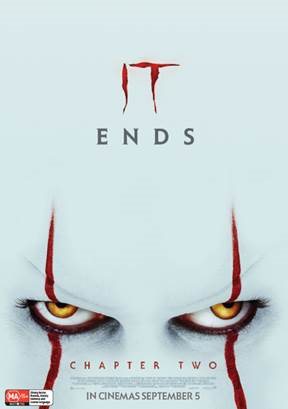 Not suitable for under 15; may be disturbing for 15-17 year olds (Very strong violence, horror and scary scenes and coarse language).

IT: Chapter Two begins with a flashback to 1989 when the seven members of the ‘Losers Club’ were terrorised by Pennywise the Clown, whom they called “IT”. At the time, they made a pact in blood that if IT were to return, they would reunite to fight it off again. Now, 27 years later, there is evidence that Pennywise is again attacking and killing children. Mike Hanlon (Isaiah Mustafa) calls the group to return home to Derry, Maine, to once again defeat this evil.

Five of the original ‘Losers Club’ reluctantly join Mike and return to what they hoped had long been buried, while one of them, Stan (Andy Bean) doesn’t reply. Each of them has to confront not only the terror of the past but also their own personal traumas: Bill (James McAvoy), now a published writer, is still plagued with guilt over the death of his brother Georgie; Bev (Jessica Chastain), who is married to a controlling, abusive man, recalls the abuse of her father; Ben (Jay Ryan), now a slimmed down version of his former self, recalls the bullying he received as a ‘fat boy’; Eddie (James Ransone) has to overcome his paralysing fears and Richie (Bill Hader) comes to terms with the fact that he’s gay. Mike also recalls the death of his parents in a house fire. Meanwhile, a former bully, Henry Bowers (Teach Grant) is now incarcerated in a mental asylum.

As the attacks by Pennywise increase, the team learn that together they are stronger. They must all bring memories from their childhood and gather in the well beneath the old house. There they perform an American Indian ritual to rid them and Derry of Pennywise for ever.

There is a lot of fantasy violence in this movie, but also some that is very realistic, including:

There is also name calling such as:

IT: Chapter Two is a supernatural horror movie with an overabundance of blood and gore and frequent coarse language. Most of the violence is fantasy but some of it isn’t and is quite intense. Fortunately, some light moments inject a bit of humour into the movie. Due to the graphic content, IT: Chapter Two is not suitable for under 15’s and some 15 – 17 year olds are likely to find it disturbing.

The main messages from this movie are to confront and overcome your fears and that we’re stronger together than on our own.

This movie could give parents the opportunity to discuss with their children attitudes and behaviours, and their real-life consequences, such as.