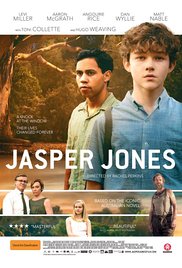 Not suitable under 13, not recommended under 15, due to disturbing themes and scenes, and coarse language.

The film takes places during the summer of 1969 in the fictional Western Australian town of Corrigan. In the dead of night, 14 year-old Charlie Bucktin (Levi Miller), an awkward book loving nerd, is woken by a knock on his bedroom window. Jasper Jones (Aaron L, McGrath), an older teenager considered by the locals to be “dangerous” asks Charlie for his trust and then tells Charlie to follow him into the night. Jasper leads Charlie deep into the bush where Jasper shows Charlies the dead body of a teenage girl, Laura Wishart, who is hanging by the neck from a tree.

The rope tied around Laura’s neck belongs to Jasper and, with Laura being a local white girl and Jasper indigenous, Jasper fears he will immediately be blamed for Laura’s death. Jasper begs Charlie to help him find Laura’s killer and prove his innocence. So Charlie and Jasper hide Laura’s body, and Charlie returns to his bedroom as though nothing has happened while Jasper lays low.

The next day Charlie unexpectedly runs into Laura’s younger sister Eliza (Angourie Rice) and they quickly become friends as a result of the turmoil created by Laura’s disappearance. Charlie and Jasper’s investigation leads them into unexpected situations. Charlie has to confront racists and finds out that his mother is having an affair, while Jasper discovers a grandfather he never knew he had.

Charlie, Jasper and Eliza’s friendship, trust and courage are tested to the full when the truth behind Laura’s death reveals dark, ugly and forbidden secrets resulting in unexpected outcomes.

The film contains a number of references to violence and violent scenes, some of them emotionally intense. Examples include:

The film contains coarse language and name-calling scattered throughout. Examples include:

Jasper Jones (M) is most suitable for an older adolescent and adult audience. The film, based upon the novel of the same name by Craig Silvey, is a coming of age story featuring small town racism and victimisation, and a hunt for the truth.

The film’s young lead actors and publicity for the film may attract younger viewers, but parents should note that the film contains some very emotionally intense scenes and themes such as suicide and incest that younger teens may find disturbing and confusing.  For this reason, the film is not suitable for children under 13, and not recommended for children under 15.

Parents of older teens may wish to discuss the effects of incest on all family members and the racist attitudes towards both Indigenous and Vietnamese people seen in the town of Corrigan.