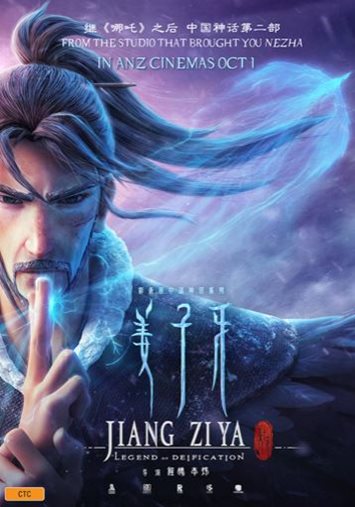 Jiang ZiYa (voiced by Zheng Xi), an Immortal who has earned himself the respect of the Gods as a war commander, shall be the leader of all Gods once he proves himself one more time by publicly executing the demon Nine-Tailed of the Fox Clan (Ji Guanlin), who has been bringing evil and destruction to humankind. Just as Jiang ZiYa is about to kill the demon, in a vision, Nine-Tailed shows him that she has tied herself to the soul of an innocent girl, who will also die if she dies. Feeling incapable of harming an innocent spirit, still in the vision, Jiang ZiYa releases Nine-Tailed. Someone else completes the execution, and Jiang ZiYa is banished from the Hall of the Gods until he frees himself of the demon's sorcery and illusions. After 10 years in exile in the Forbidden Land, one day, Jiang ZiYa encounters the girl he saw in the vision, Jiu (voiced by Yang Ning). It turns out that only the body of Nine-Tailed was destroyed and her evil spirit lives on within Jiu. Jiu, under the spell of Nine-Tailed, has forgotten her past and is feared and rejected by humans and haunted by demons. Based on a recurring dream, she is on a mission to find her father who she hopes can prove that she is not the Fox Devil. Jiang ZiYa – who does not believe it is right to sacrifice an innocent, even for the greater good – decides to help Jiu and destroy Nine-Tailed once and for all.

Jiang ZiYa – Legend of Deification is the second instalment of the Fengshen Cinematic Universe series, following the 2019 Ne Zha. The story is loosely based on a popular Chinese mythology figure Jiang ZiYa. Deeply rooted in Chinese mythology and showing in original Mandarin language, the movie will most likely appeal to a special-interest audience with some background knowledge and passion for Chinese animation – the visuals are extremely impressive! Doom, gloom, peril, and violence are highly prominent, and mythical/mystical themes like demons, devils, possession of evil spirits, human sacrifice, and reincarnation render the film unsuitable for a young audience under 10 and warrant parental guidance for an audience under 14.

The main messages from this movie are that you should not blindly follow a leader but listen to your own conscience and values.