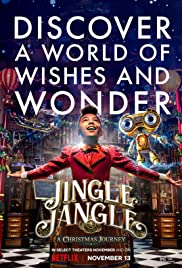 Not suitable under 7; parental guidance to 10 (mild scary scenes and sad themes)

Jingle Jangle: A Christmas Journey is a Christmas musical fantasy movie. It tells the story of Jeronicus Jangles (Forest Whitaker (and Justin Cornwell as young Jeronicus)), a brilliant inventor and engineer of imaginative toys, who owns the magical and beautiful toyshop, ‘Jangles and Things’. Everything takes a downward turn for Jeronicus when his apprentice Gustafson (Keegan-Michael Key) steals his book of inventions, as well as his most prized new toy, the animated talking matador doll, Don Juan Diego (voice of Ricky Martin). Gustafson sets up his own toy empire with the stolen ideas and Jeronicus is deeply hurt by his apprentice’s betrayal. Slowly, Jangles and Things sinks into financial ruin. When his wife Joanne (Sharon Rose) dies and his daughter Jessica (Annika Noni Rose) grows distant and leaves him alone, Jeronicus is a sad man whose once magical toyshop is now a run-down pawn shop. Just when things are at their worst, Jeronicus is surprised by the arrival of his young granddaughter, Journey (Madalen Mills), whom he has never met before. Disarmed by her infectious, unconditional love and affection for him, as well as by her brilliant intelligence, Jeronicus begins to see things more positively. Journey shares her grandfather’s passion for inventing, and she is not just brilliant, she also has the innocent imagination and belief that only a child can bring. Journey’s belief in magic and the impossible breathes new life into the discarded inventions in Jeronicus’ workshop. Gustafson, on the other hand, is quickly running out of stolen inventions and has his sights set on stealing whatever he can from Jeronicus. Journey and Jeronicus must rescue their latest invention from Gustafson and bring it to life in time for Christmas.

Jingle Jangle: A Christmas Journey is a fun and different twist on the usual holiday movie genre. What it lacks in coherent plotlines, it makes up for with great musical numbers, fantastic costumes and some lovely positive messages about family, forgiveness and the magical powers of belief and imagination. The central character of Journey, a young ten-year-old with a passion for inventing, is a wonderful positive role model whose twinkling brightness and spark is delightful. Whilst smaller children will enjoy the music and dancing (even if they get a bit lost in the story), parents should be aware that there are a few scenes that some children might find mildly scary.

The main messages from this movie are that being different is something to be embraced even when it feels tough; that imagination and belief are just as important as facts and calculations; and that it is never too late for forgiveness and redemption.