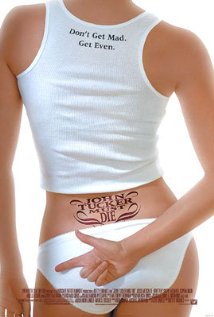 Not recommended under 15 (Sex. Theme. Lang)

As a result of men always skipping out of her mother’s life, Kate (Brittany Snow) has constantly moved from school to school. She has remained ‘invisible’ all of her school life, never experiencing being popular, and extremely inexperienced when it comes to having relationships with boys. John Tucker (Jesse Metcalfe) is captain of Forest Hills High basketball team and all round school’s most popular guy, who is manipulating and bedding three girls at the same time, cheerleader Heather (Ashanti), campus reporter Carrie (Arielle Kebbel) and radical vegan Beth (Sophia Bush). When the girls discover that John Tucker has been dating all three at the same time a brawl erupts between them. Kate suggests that rather than fighting amongst themselves, the girls should seek revenge against John Tucker, i.e. that “John Tucker Must Die.”

The girls try to ruin John by running a campaign to embarrass him as much as possible, and make him the least popular guy at school. When John manages to turn every plot to his own advantage, making himself even more popular, the girls decide that that the ultimate revenge would be to make John fall in love and then break his heart. To achieve this, they recreate Kate in their combined image and set about the task of making John fall in love with her.

Sexual relationships, self image and awareness

There is some coarse language and put-downs in this movie, including:

There are also several put-downs in this movie, including jerk, retard, clap and pig.

John Tucker Must Die is a teenage romantic comedy that stereotypes high school male and female students. It has some funny moments that will appeal to its target audience of young adolescents. However the movie sends a number of negative messages to teenage viewers, including that high school males are expected to treat relationships with high school girls as conquests of sexual desire and that girls are objects or targets to be chased and acquired through whatever means necessary including lying and deceit. Alternatively, the message is sent to high school girls that lying about who you really are will get you in trouble. Cheating in relationships is desirable for males, but not for girls. The film glamorises casual sex, and sends the message that it is acceptable, and in many ways expected, for high school students of both sexes to participate in casual sex, including multiple sexual encounters.

Values in this movie that parents may wish to reinforce with their children include honesty as a path to self-esteem and self worth. Deception is shown to have negative and hurtful repercussions.

This movie could also give parents the opportunity to discuss with their children the importance of developing positive and respectful relationships based upon trust and understanding.