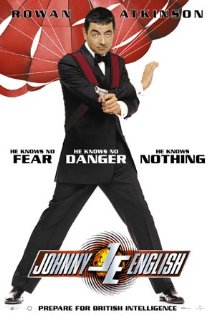 Not recommended under 15 (Sex. Theme. Lang)

Johnny English has a desk job for England’s Central Intelligence Service (CI6), and dreams of life as a secret agent. When all of England’s CI6 agents are murdered, Johnny is upgraded to the status of agent, and given the task of guarding England’s crown jewels. Regardless of the high tech security the jewels are stolen from right under the nose of Johnny.

After following the trail of the thieves, Johnny discovers the jewels being loaded into the back of a hearse. Unfortunately for Johnny, he chases the wrong hearse through the streets of London and loses the jewels. Johnny soon discovers that Pascal Sauvage, a French billionaire is responsible for the theft, and decides to search his office, but while attempting the search English is captured by Pascals. Just when all looked bleak, Lorna Campbell, an American secret agent who is also investigating Pascal, rescues Johnny. Johnny and Lorna team up and track Pascal to his castle in France where are captured and Pascal orders them to be shot.

Fortunately for Johnny and Lorna, they manage to escape death in the nick of time, and rush back to England. The remainder of the movie plays out the attempt by Johnny and Laura to stop Pascal in his plans to control England.

Males dominate the use of violence in a battle between good and evil. The exception is the heroine of the film Miss Campbell, who used violence effectively and successfully.

Children under the age of five might be disturbed by:

Children within this age range should be able to distinguish the violence presented in Johnny English as comical and not be fearful. However the material identified as scary for younger children may also affect older children depending on their level of exposure to on screen violence.

Early adolescents should be able to distinguish the violence presented in Johnny English as comical and not representing real life.

There is only one scene with sexual references. During a heart to heart, Lorna reveals she has not “made love” for a long time and that she desires Johnny. But as usual, Johnny doesn’t quite get his intended message across, at which point Lorna thanks Johnny for not taking advantage of her vulnerability and the scene ends.

The main take home themes are that good triumphs over evil and crime doesn’t pay. Values parents may wish to encourage include:

Values parents may wish to avoid or discourage include: