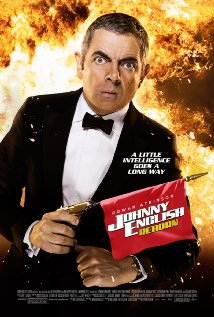 Johnny English (Rowan Atkinson), accident prone British intelligence agent for MI7 is on a retreat high in the Tibetan mountains honing his Kung Fu skills. Meanwhile back in London, MI7 has been told by Hong Kong agent, Fisher (Richard Schiff), that a group of international assassins called Vortex is planning to kill the Chinese Premier. Fisher will only pass on vital information to Johnny English, whom Fisher trusts. Pamela Thornton (Gillian Anderson) the head of MI7 recalls Johnny English from his Tibetan retreat and teams him up with Agent Tucker (Daniel Kaluuya) whose job is to keep Johnny on the straight and narrow. Kate Summer (Rosamund Pike), MI7’s behavioural psychologist is also assigned to keep an eye on English.

English and Agent Tucker are sent to Hong Kong and make contact with Agent Fisher, who gives English one of three keys needed to unlock the secret weapon that will be used to kill the Chinese Premier. However, before Agent Fisher is able to provide any further information he is killed.

Johnny English and Agent Tucker now have to track down the remaining two keys, dodging international assassins and becoming involved in conspiracies involving the KGB, CIA and MI7, as Johnny English attempts to save the life of the Chinese Premier and prevent global chaos and disaster.

The film’s action violence, including the depiction of several violent deaths, is depicted in an unrealistic slapstick manner with minimal depiction of blood and gore. Examples include:

Younger children in this age group may also be disturbed by the above-mentioned violent scenes.

Johnny English Reborn rated (PG) is a comedy spy thriller targeting adolescents and adults. Although a little predictable it is likely to entertain those who enjoy spy spoof films or are Rowan Atkinson fans. Younger adolescents are likely to find the slapstick humour hilarious.

The main messages from this movie are that you should never give up or surrender regardless of how many times you fail.

Parents may wish to discuss the gender stereotyping in the film.