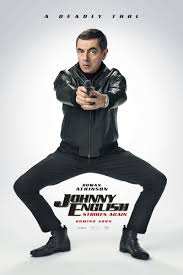 Not recommended under 10, PG to 12 due to violence, themes and mild coarse language.

This is the third instalment in the Johnny English spoof comic spy series. Johnny English (Rowan Atkinson) is a James Bond-like secret agent, who at the start of the film is retired from the secret service and working as an eccentric school teacher. He’s called back into action when Silicon Valley entrepreneur (and secret cyber villain) Jason Volta (Jake Lacey) ‘outs’ the entirety of the British secret service by hacking their server. It quickly transpires that Volta is about to cause an international travesty by turning off the internet! As someone who has chosen to shun all digital technology, Johnny English is the man to save the day, aided by his trusty sidekick Bough (Ben Miller) and Russian secret agent Ophelia (Olga Kurylenko).

This film has many scenes of slapstick violence, including fighting and shooting, although no one gets fatally shot. Several characters are hit over the head or fall from a height, and in the final scene, Johnny English is shot at whilst wearing a protective suit of armour. There are no gratuitous injuries or graphic fight scenes. Examples include:

Children of this age group may also be scared or disturbed by the above-mentioned violent or scary scenes.

Children of this age group may also be scared or disturbed by the above-mentioned violent or scary scenes.

Children of this age group are unlikely to be scared or disturbed by this film.

Johnny English Strikes Again is an action-packed spy spoof, with clever slapstick physical humour and many great comic one-liners. Fans of Rowan Atkinson (particularly as Mr. Bean or previous editions of Johnny English) are likely to enjoy the film.

The main messages from this movie are that good will always overcomes bad will and that sometimes the life experience that comes with age has more value than society would like us to believe.