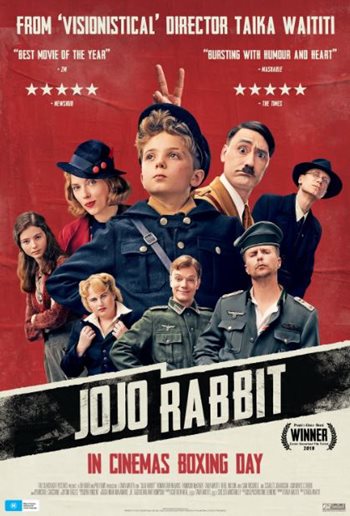 Ten-year-old Hitler Youth-hopeful, Jojo (Roman Griffin Davis), and his imaginary friend Adolf Hitler (Taika Watiti), discover Jojo’s mother, Rosie (Scarlett Johansson), is harbouring Jewish girl, Elsa (Thomasin McKenzie) during WWII. As Jojo struggles with his Nazi fanaticism and his mother’s ‘betrayal’ of Germany, he goes on a journey that opens his eyes to the truth of the war and the beliefs he has so ardently defended.

Jojo Rabbit is a satirical depiction of the journey a ten-year-old Hitler Youth trainee must go on, as he discovers the truth about Nazism and the Jewish people. Due to strong violence, language, and themes of war, death, loss, and anti-Semitism, Jojo Rabbit is not suitable for children under 15. However, with strong performances, great pacing, funny dialogue and sequences, and poignantly dramatic moments, this film is likely to appeal to older teens and adults.

The main messages from this movie are to treat others with respect and to help others even in the face of overwhelming abuse.