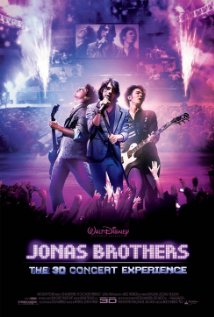 Parental guidance recommended to 8 due to potential lack of interest

Jonas Brothers: the 3D Concert Experience is a recording of a concert, plus documentary and behind-the-scenes footage, filmed in 3D. The concert is in Madison Square Garden in front of tens of thousands of young screaming teenage girls and the performance is interspersed with short documentary snippets of the daily life happenings of the three brothers and their sometimes hysterical fans (all young teenage girls).

The film contains no violence, but there are several examples of hysterical teenage girls chasing and harassing the three brothers.

Some children under five could be concerned by:

Children over the age of eight are unlikely to be disturbed by anything in this film.

Children over the age of thirteen are unlikely to be disturbed by anything in this film.

The performance style of the brothers is sometimes suggestive, and there are several scenes where teenage girls are clearly infatuated with them.

After one performance there are some champagne-style bottles lined up in a room and one brother pops the cork and sprays the contents around the room.

The Jonas Brothers present a spectacular, professional, high energy performance that will highly entertain its intended audience of teenage and ‘tween’ girls. There is no significant message other that promoting the Jonas Brothers as a pop group and teen idols.
Values in this movie that parents may wish to reinforce with their children include: