Journey to the Center of the Earth (in 3D) 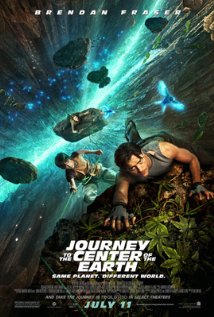 Trevor Anderson (Brendan Fraser) is a vulcanologist who has just had his research funding cut and is about to be ejected from his lab. To make matters worse his 13-year-old nephew Sean (Josh Hutcherson) has just arrived for a ten days of quality time with his uncle. Sean’s father Max (Jean Michael Pare), Trevor’s brother, went missing ten years earlier while exploring a volcano, and Trevor has being working ever since to prove his brother’s theories about the centre of the Earth. While looking at a computer screen displaying seismic activity throughout the world, Trevor realises that the readings are identical to those on the day that his brother went missing. Trevor decides investigate the situation for himself and goes to Iceland taking Sean along as well.
In Iceland, Trevor and Sean team up with Hannah (Anita Briem), a mountain guide who leads them to the top of a volcano to get a reading from one of Max’s seismographic instruments. An electrical storm erupts, with lightning strikes forcing the trio into a cave. When lightning strikes the cave’s entrance the trio are sealed inside and their escape attempts lead them to the centre of the earth and many adventures.

Journey to the Center of the Earth contains scenes depicting intense action adventure, accidental harm and danger but contains no blood and gore or interpersonal violence. Examples include:

Journey to the Center of the Earth contains images of monstrous creatures and scary moments that may scare or disturb younger children. The fearful effects of these images may be heightened due to the film’s realistic 3D visual images. The reality/appearance of the 3D visual effects alone may scare/ disturb younger children who have not experienced 3D films before. For example:

The film contains a couple of low-level sexual references. Examples include:

There is some mild sensuality and very low-level sexual activity in this movie. Examples include:

Journey to the Center of the Earth is a 3D science fiction action adventure targeted at a younger adolescent and child audience which is likely to entertain adults as well.
The main messages from this movie are:

Parents may also wish to discuss the film’s portrayal of the only female character. Hannah is presented more capable in every respect than the film’s male characters who rely on her for guidance and to bail them out of trouble.