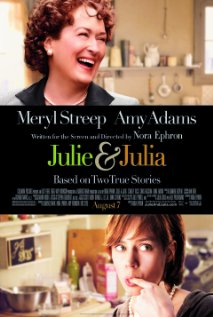 Lacks interest and not recommended under 8, PG to 13 (Disturbing scenes, sexual references and coarse language)

Julie and Julia is based on two true stories, that of Julia Child, of recipe book and TV cooking fame and that of author Julie Powell who gains fame by recording her exploration of Julia’s recipes in a blog.

The film opens with Julia Child (Meryl Streep) and her husband Paul (Stanley Tucci) arriving in France and setting up house in 1949; Paul is an American diplomat who has been assigned to Paris for the next four years. The film then jumps to the year 2002 where Julie Powell (Amy Adams) and her husband Eric (Chris Messina) have just moved to a new apartment above a pizza shop in Queens. Julia works in a small office cubicle answering distraught calls from disgruntled insurance claimants. The film jumps back and forth between telling Julia Childs’s story, which unfolds over a ten year period during the late forties and fifties and Julia Powell’s story which spans a single year (2002).

After settling down in Paris, Julia Child becomes restless with her life and eventually decides to take on cooking, enrolling in the male dominated Le Cordon Bleu cooking school. During her studies, Julia meets two French women in the midst of writing an American/French cook book and, when the book is rejected by their publisher as being “not English enough”, Julia takes over the project and spends the next eight years of her life rewriting the book.

Like Julia Child, Julie Powell decides that she needs meaning and fulfilment in her life and, with the help of her husband Eric, starts a blog in which for a one year period she will record her journey cooking her way through Julia Child’s cook book, including all 524 recipes. The film follows Julie’s ups and downs over the one year period.

The McCarthy era in the USA

While the film Julie and Julia contains no physical violence it does contain some scenes depicting individual emotional outbursts, a low-level domestic dispute, references made to death and the terrorist attack of 9/11, and one comedy scene depicting copious amounts of gushing blood. Examples include:

The film Julie and Julia contains some product placement including

The film contains some sexual references and innuendoes. Examples include:

There is some infrequent partial nudity and sexual activity in this movie, including:

There is some infrequent coarse language and name calling in this movie. Example include:

Julie and Julia is based upon two separate stories woven together into a single comedy, targeted mainly at adults, but also well suited to older adolescents or anyone who has a passion for food or cooking. The film is highly entertaining from start to finish with a number of truly funny moments with Meryl Streep’s performance being particularly outstanding.

The main messages contained within this film are: