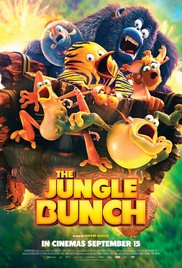 Not recommended under 7, parental guidance recommended 7-9, due to violence and scary scenes

The Jungle Bunch is a group of animals dedicated to keeping the jungle safe. Maurice the Penguin who looks like a tiger, is helped by his friends Gilbert the Tarsier, Miguel the Gorilla, and Maurice’s ‘son’, Junior, who is a tiger fish. Maurice wants to be a hero like his mother Natacha the Tiger who used to lead the Justice Group with Tony the Sloth and Goliath the Rhino. The Justice Group has retired to live a life in peace and Natacha disapproves of Miguel trying to be a hero.

The jungle is under threat from a very mean and nasty koala named Igor. During the time that Natacha and her group were protecting the jungle island, Igor burnt it to the ground using explosive mushrooms, which he had invented. Natacha’s friend Ricky, a monkey, managed to save Miguel’s egg before he himself lost his life in the fire. Now that the jungle has regenerated, Igor has returned from exile with more dastardly plans.

Animals in peril; good versus evil

There is a lot of violence in this movie, some examples include:

Some of the violence is comedic and done for laughs such as:

The Jungle Bunch is an animated movie which might appeal to older children. It features familiar characters from the long-running French television series of the same name. However, parents who have seen the TV series or a previous film of the Jungle Bunch might be disappointed with this one. Despite the cute-looking characters, there are some intense dark and violent scenes which are likely to upset younger children.  It is therefore not recommended for under sevens and parental guidance is recommended for the seven to nine year old group.

The main messages from this movie are that you can be a hero even if you don’t look like one, and that good triumphs over evil.