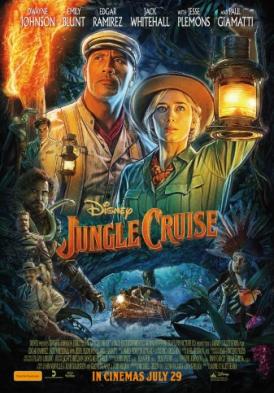 Not suitable under 13; parental guidance to 15 (violence, scary scenes, themes)

In 1916 London, Dr Lily Houghton (Emily Blunt) tries to open the eyes of a male-dominated, scientific association to the possibilities of an ancient tree whose flowers have miraculous medicinal properties. Disregarded and dismissed, she sets off for the Amazon with her wary brother, MacGregor (Jack Whitehall), determined to find the legendary ‘Tears of the Moon’ for herself. Here she enlists the help of Frank Wolff (Dwayne Johnson) to take her down the river on his decrepit, yet endearing, boat. The German Prince Joachim (Jesse Plemmons) has also heard the wondrous tales of a tree so powerful its flowers can cure death itself. He wants it to win the war for his country and will stop at nothing to keep Lily from finding it. Lily, however, is not to be underestimated and her dream of finding the tree and studying the flower in an effort to help all of humanity is what keeps her going. The journey into the heart of the Amazon is filled with danger and deception, with poisonous creatures and inhospitable terrain but also with a band of undead conquistadors cursed by the jungle and the ancient tribes who were once its keepers. The conquistadors are also searching for the tree in the hopes that the ‘Tears of the Moon’ might lift their curse and set them free. It would seem however, that the tree itself is well concealed and that only those with the purest intention would have any hope of finding it.

Jungle Cruise is an action adventure film based on the famous Disney theme park ride. Touted as a family film, this one is not for young children due to frequent violence, some scary scenes and creepy characters. Blunt steals the show and is an excellent role model for young women but the film is best suited to teen and adult audiences.

The main messages from this movie are to follow your dreams no matter where they may take you, that sacrifices will be rewarded, broken hearts can be healed and ultimately that good will prevail.