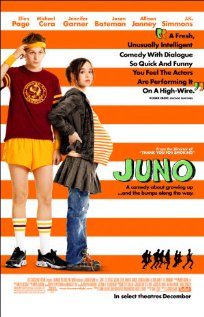 Not recommended under 12, PG to 15 due to themes and sexual references

Juno MacGuff (Ellen Page) is a fairly typical 16-year-old teenager with attitude and a quick tongue. She decides to experiment with sex with her friend Paulie Bleeker (Michael Cera) which results in an unwanted pregnancy. Juno decides to confront her father Mac (J.K. Simmons) and stepmother Bren (Allison Janney) who, although initially surprised, are very supportive of Juno. At first Juno thinks she’ll have an abortion, as she knows she is too young to be looking after a baby. However, after attending the clinic she changes her mind.

Juno then sets out to find the perfect couple to adopt her baby and thinks she has found them in Vanessa (Jennifer Garner), desperate for a baby, and Mark Loring (Jason Bateman). Juno is to learn that nothing is simple or straightforward in life and that bringing a new life into the world is far more complicated than she thought.

In addition to the above-mentioned violent scenes and scary visual images, there are some scenes in this movie that could scare or disturb children aged eight to thirteen, including the following:

There is much discussion about sex and pregnancy, and many sexual references in this movie, including:

Juno is a comedy about a serious subject. It is directed to adolescents who might find it confronting while funny, with the realisation that many human emotions are involved in bringing a new life into the world.
The main message from this movie is that casual sex can result in an unwanted pregnancy which can affect many people’s lives.

Values in this movie that parents may wish to reinforce with their children include Juno’s courage in telling her parents about her pregnancy and in continuing with her studies while pregnant.

This movie could also give parents the opportunity to discuss with their children issues concerning casual sex, contraception, pregnancy and abortion.