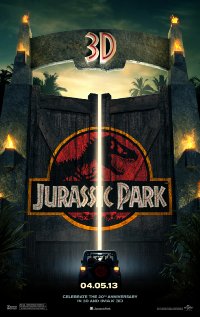 Not recommended under 10, PG to 14 (Violence; Disturbing themes and scenes)

Jurassic Park 3D is the updated version of the classic adventure film directed by Steven Spielberg, based on the novel by Michael Crichton. The story centres upon Jurassic Park, a nature reserve established on a remote South American island by billionaire businessman John Hammond (Richard Attenborough). Hammond and his team of dedicated scientists have populated the park with a variety of genetically engineered dinosaurs. This technological breakthrough was made possible by extracting and manipulating the DNA from dinosaur blood found in the stomachs of ancient fossilised mosquitoes.

As the reserve nears completion, Hammond invites selected guests to view the site, in the hope of attracting recognised experts to take on management roles at the park. These visitors include palaeontologist Dr Alan Grant (Sam Neill), his partner, palaeobotanist Dr. Ellie Sattler (Laura Dern) and chaos mathematician Dr. Ian Malcolm (Jeff Goldblum).  Hammond’s grandchildren, Lex (Ariana Richards) and Tim (Joseph Mazzello) are also given the opportunity to see the park and its amazing creatures.

Initially, the visitors are all suitably impressed and astounded at the re-created dinosaurs and carefully replicated habitats. Unfortunately, their wonder turns to fear when the park’s computer system is disabled and several dinosaurs escape the high-voltage confines.The remains of the film shows their desparate fight for survival.

The film contains frequent violent episodes involving dinosaurs and their prey.  There are also some episodes of violence perpetrated by humans on dinosaurs.  Examples include:

In addition to the above-mentioned violent scenes, there are many scenes in this movie depicting rampaging dinosaurs and people in peril that could scare or disturb children under the age of five, including:

Children in this age group will also be disturbed by the scenes described above.

There is some product placement in this movie, including

There are some mild depictions of substance use in this film, including:

There is some mildly coarse and threatening language in this film, including:

Jurassic Park 3D is the 3D update of a classic, well-devised film that operates at a range of levels.  Taken at face value, it offers a fast-paced science fiction adventure which has attained almost iconic status in recent years (due partly to its pioneering use of computer-generated special effects).  Beyond this immediate layer, Jurassic Park also contains an exploration of the role of humans on the earth, questioning the drive for dominance over the planet and nature itself.

Given the multiple frightening and violent scenes, with realistic dinosaurs and some gory and disturbing scenes, this is not a film for younger children. Although the original film was classified PG  for "Medium level violence", the new version is classified M for "Violence". The 3D effects make it much more intense and scary for children, particularly on large screens. It is therefore not recommended for under 14s with parental guidance strongly recommended for 14 year olds.

This movie could also give parents the opportunity to discuss with older children the long-term, global consequences of human actions on the planet and the implications of using new technologies, like cloning, just because we can