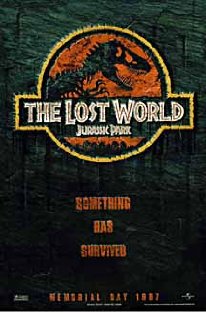 Not recommended under 10, PG to 12 (Violence; Disturbing themes and scenes)

The Lost World (1997), again directed by Steven Spielberg, continues the story of the first Jurassic Park film.  Following the failure of his Jurassic Park venture, billionaire John Hammond (Richard Attenborough) has had a string of financial problems. Recently, his company, InGen was taken over by his unscrupulous nephew, Peter Ludlow (Arliss Howard).  Now, Ludlow plans to turn around the company’s losses by establishing a new version of the extinct-species park in San Diego.  He intends to populate this tourist attraction with some of the stock remaining on the formerly secret dinosaur-cloning site, Isla Sorna.  To this end, Ludlow has employed a large group of renegade hunters such as Roland Tembo (Pete Postlethwaite), Dieter Stark (Peter Stormare), and Ajay Sidhu (Harvey Jason) to track down, capture and transport dinosaurs such as the tyrannosaurus back to California.

Hammond seeks to circumvent Ludlow’s scheme by prematurely disclosing and publicising the existence of the secret dinosaur-breeding ground and its amazing creatures. With this in mind, Hammond sends a small team of experts to the island to document the species living there. This group includes photographer and environmentalist Nick Van Owen (Vince Vaughan), field equipment expert, Eddie Carr (Richard Schiff), behavioural palaeontologist Dr. Sarah Harding (Julianne Moore) and her somewhat estranged boyfriend, chaos mathematician Dr. Ian Malcolm (Jeff Goldblum).  Following his almost fatal experiences at the first Jurassic Park, Malcolm is initially opposed to the plan.  However, he reluctantly agrees to become involved after learning that Harding has been recruited, and is already on the island.  Against his wishes, Malcolm’s daughter, Kelly (Vanessa Lee Chester) also travels to the island.

As expected, things go horribly wrong for both groups, who find that they must work together in order to survive.

There is repeated violence between dinosaurs and humans in this movie, such as when:

In addition to the above-mentioned violent scenes, there are several scenes in this movie that could scare or disturb children under the age of five, including:

There are no further scenes in this movie that may scare or disturb children over the age of thirteen.

There is some mild coarse, threatening, and derogatory language in this film, including:

The Lost World:  Jurassic Park is a violent science fiction adventure.  This film contains more overt violence than the first in the series, which relied upon the development of an underlying, implicit sense of menace rather than explicitly gruesome scenes.  For this reason, The Lost World appears less concerned with promoting any kind of meaningful message than providing an effective, action-packed piece of escapism.  Due to the almost gratuitous number of scary, violent scenes, this movie is not appropriate for young children.

One value in this movie that parents may wish to reinforce with older children is that of working together.

This movie does not provide any significant opportunities for parents to discuss attitudes and behaviours with their children.