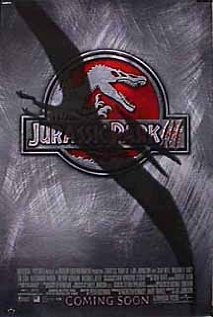 Not recommended under 12, PG to 15 due to violence and disturbing themes and scenes

Jurassic Park (2001), directed by Joe Johnston, is the third in the Jurassic Park series, which first appeared in 1993. The film revisits paleontologist Dr. Alan Grant (Sam Neill), who has made every effort to put the horrific incidents of the Jurassic Park disaster behind him. In the intervening years, Grant has continued his dinosaur research, but has been limited by an ongoing lack of adequate funding.  For this reason, he reluctantly agrees to accept a sizeable donation for research in exchange for his services as guide for a small pleasure flight over abandoned dinosaur-cloning site, Isla Sorna. The flight has been financed by wealthy businessman Paul Kirby (William H. Macy), who is joined on the trip by pilot M. B. Nash (Bruce Young), ex-wife Amanda Kirby (Tea Leoni), Grant’s PhD student Billy Brennan (Alessandro Nivola), in addition to the slightly sinister Mr. Udesky (Michael Jeter) and Cooper (John Diehl).

Grant only discovers the Kirbys’ real intentions for the expedition after the party near the island. It then becomes clear that they plan to land on the island and begin looking for their son, Erik (Trevor Morgan), who recently disappeared near the island after a freak parasailing accident with Amanda’s new partner, Ben Hildebrand (Mark Harelik). Despite Grant’s protests, the group lands, only to discover for themselves the true dangers of the island.  Added misfortune eventuates when their plane crashes a few hours later, and the group must draw upon all of their resources to survive.

Violence in the natural world; family breakdown; separation of children from their parents; the role of humans and their technological interventions on the earth

There are also several heated verbal exchanges between Dr. Grant and Mr. Kirby and in another scene, Cooper knocks Dr. Grant unconscious (although the actual blow is not shown).

In addition to the above-mentioned violent scenes and scary visual images, there are several scenes in this movie that could scare or disturb children aged five to eight, including the following:

In addition to the above-mentioned violent scenes, there is one scene in this movie that could scare or disturb children aged eight to thirteen:

There is one mild sexual reference in this movie, when ex-partners Amanda and Paul glimpse each other while dressing.  After observing that Paul had lost some weight, she adds, “you still look good…” and Bob replies, “so do you”.

There are no direct depictions of complete nudity or sexual activity in this movie.  However, one scene shows ex-partners Amanda and Paul Kirby changing clothes in front of one another.  Viewers see Amanda front on, from the waist up in her bra, and Paul is shown bare-chested.

There is at least one instance of substance use in this movie, including:

Jurassic Park III is a fast-paced science fiction adventure. While providing a more satisfying storyline than the second film in this series, this movie again depends heavily upon violent episodes for its impact. For this reason, Jurassic Park III is not appropriate for young children, who may well be terrified by the graphic, quite realistic depictions of dinosaur attacks.