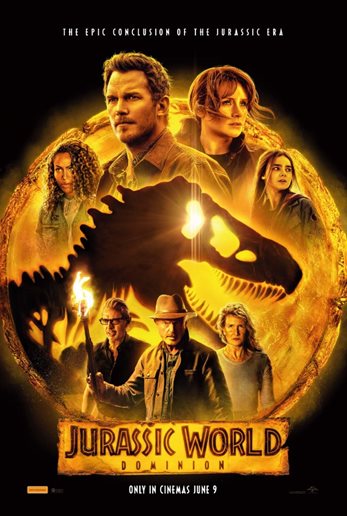 Not suitable under 12; parental guidance to 14 (violence, scary scenes)

Four years have passed since the fall of Isla Nublar and dinosaurs now roam freely across the planet. The rise of human deaths from dinosaurs is increasing and the balance between co-existence and survival of the human species is faltering. Owen Grady (Chris Pratt) and partner, Claire Dearing (Bryce Dallas Howard), have moved to a remote mountain cabin where they live with 13-year-old Maisie Lockwood (Isabella Sermon), daughter of Charlotte Lockwood. They manage to maintain a sense of harmony with the local raptors.

Meanwhile, Dr Ellie Sattler (Laura Dern) teams up with her former partner, Dr Alan Grant (Sam Neil), to investigate the swarms of giant locusts that are devastating crops throughout the US. Their research leads them to multi-national company, BioSyn, whose crops are not affected by the locusts. The pair travel to the Dolomite Mountains in Italy, where BioSyn’s headquarters are located and where they keep captured dinosaurs to study their DNA. Heading this corporation is the nefarious Dr Lewis Dodgson (Cambell Scott). The two couples come together to fight the evil Dr Dodgson when Maisie and a baby velociraptor are both kidnapped by him. It transpires that both Maisie and the baby raptor were conceived as clones of their respective mothers and Dodgson needs their DNA to further his aims.

There is a lot of violence throughout this movie although no main characters are seriously hurt or injured. Some examples include:

Jurassic World Dominion is a science fiction, adventure-filled movie, reportedly the last of the Jurassic World franchise. Once again, the film shows the moral dilemma of caring for animals while also protecting human beings. The dinosaurs are very frightening in appearance and in action over the length of the movie. Older children who have seen the earlier movies may not be too bothered by this one, however, it is not suitable for children under 12 years of age.

The main messages from this movie are that science should not be used to exploit people or animals; and that wild animals should not be controlled.