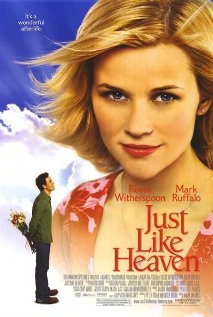 Elizabeth Masterson (Reece Witherspoon) is a workaholic who has completely dedicated her life to being a doctor and helping people. Spending long shifts in the hospital she leaves little time for anything else, until one day tragedy strikes. David Abbott (Mark Ruffalo), a former landscape designer, is still mourning the loss of his wife when he sub-lets a beautiful San Francisco apartment. In his drunken depression he slowly begins to trash the apartment, thereby summoning the spirit of Elizabeth, who lived there before him, refuses to believe that she is dead and so insists that he leave her apartment. David refuses to leave and instead makes various attempts to heave her spirit “exorcised”. When all efforts fail, a new possibility is presented to them. Working together they try to unravel the mystery of her identity and in the process slowly begin to fall in love.

When her identity is discovered a new problem arises, as her life-support is due to be switched off and the only tie keeping her from ‘crossing over’ is severed. In desperation David hatches a last-minute plan to buy some time to save her life. Unfortunately things begin to go awry and the outcome that was expected and hoped for was not to be, at least not initially. It takes a final selfless act to bring all the pieces together and in the process save not one life, but two.

This film contains a fair amount of violence:

There are a number of scenes in this film that could potentially disturb younger children.

Children over the age of eight are unlikely to be frightened by anything in this film.

Children over the age of thirteen are unlikely to be frightened by anything in this film.

There are some instances of partial nudity and implied sexual activity:

There is frequent use of alcohol in the movie, and references to it, including:

The film contains a moderate amount of coarse language, including:

The movie’s main message is that some things are simply meant to be. What may, at first, appear to be a series of random events may upon closer inspection be very much connected, if you only take the time to look and believe.