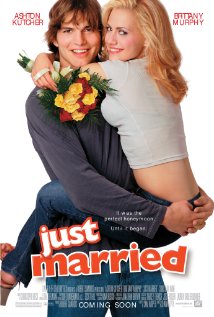 Not recommended under 13 (Lang. Sex.)

The film opens with Sarah and Tom, newlyweds, arriving back home after their European honeymoon. The viewer is given the distinct impression that all has not gone well as Tom and Sarah display great animosity towards each other on arrival at the airport. The main story is then presented as a flashback of the honeymoon and the events leading up to their arrival home.

Following the wedding, the newlyweds board a plane headed for Europe arriving at a picturesque castle where they intend to spent the first night of their honeymoon. Unfortunately Tom manages to short out the entire castle’s wiring system while trying to plug in a marital aid, and the pair are evicted from the castle. While searching for new accommodation, Tom manages to crash the car into a snowdrift and the couple is forced to spend the first night of their honeymoon in the front seat of a very small car. The following morning is just as disastrous—their car ends up being pushed over a cliff, the pair run out of money and Tom and Sarah end up staying in a dirty, run-down hotel room. Disaster strikes again resulting in another wrecked hotel room following which Tom decides to borrow money from Sarah’s father for a luxurious hotel room. Stress begins to tell, as the newlyweds, unable to consummate their marriage begin to continuously bicker. At this point Peter Prentiss, an old boyfriend of Sarah’s arrives on the scene. Sarah decides to go out for the day with Peter, and Tom ends up in a bar with strange women. At the end of the day Tom catches Peter kissing Sarah and Sarah finds a strange lacy red bra in the hotel room. The pair decides their marriage may have been a big mistake and board a plane back to the states.

The film reverts to the present time where Sarah has just left Tom and returned to her parent’s home. After having a heart to heart with his father Tom realises married life isn’t perfect, and that he is in love with Sarah and wishes to spend the rest of his life with her. Tom arrives at Sarah’s house and after making a heartfelt plea the pair are reunited.

The violence presented in Just Married was minimal and performed out of anger and frustration by both Tom and Sarah.

The one exception was a scene where a women slaps Tom across the face inferring a violent sexual act, and then kicks Tom in the face when he refused her advances. The violence was absent of real life consequences with no visible signs of injury.

Children in this age group might be disturbed by the following scenes:

Young children in this age group may also be disturbed or scared by the scenes described above.

Children in this age group may be disturbed by the scene where Tom is slapped across the face as a form of sexual foreplay and then kicked in the face.

Children in this age group may also be disturbed by the scene where Tom is slapped across the face as a form of sexual foreplay and then kicked in the face.

One scene involves Sarah and Tom lying in bed listening to moaning and squeaky bed springs in the next room, presumably the sexual activities of the couple in that room.

There are several intimate scenes involving Sarah and Tom, but the most the viewer is allowed to see is some passionate kissing. No naked bodies are presented in the film. There is a scene where a girl tricks her way into Tom’s room pushes him onto the bed jumps on him and rips off her top, however the viewer sees only the woman’s back.

One scene involved Tom entering his flat to find a friend fast asleep and surrounded by empty beer bottles. While it was not explicit, the inference formed was that the friend had passed out due to excessive alcohol consumption.

There were several instances where colourful language and putdowns were used including: