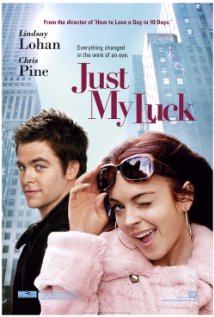 Ashley Albright (Lindsay Lohan) was born under a lucky star and while the forces of the universe have arranged for everything to go her way, Jake Hardin (Chris Pine) has not been so fortunate. As he resignedly endures one hideous disaster after another Ashley’s life could not be more perfect. Then one night, at a masquerade ball, destiny decrees they meet and through a mystical twist of fate their fortunes swap. Suddenly Jake cannot go wrong whereas Ashley’s perfect life unravels around her as she is: arrested, fired, evicted, beaten, dumped, drenched, starved, humiliated and electrocuted.

In a desperate bid to get her old life back Ashley attempts to track down the masked stranger she kissed only moments before her luck changed. Hopeless and dejected, she is helped by a kind-hearted man (Jake) who takes pity on her. Through a number of chance encounters they are thrown together and slowly develop feelings for one another. When Ashley discovers that Jake is not only the one she kissed, but also the one she has been searching for all along, she must choose between her heart and the comfort of the life she once led.

Luck and what you make of what you have

In addition to the above-mentioned violent scenes, there are one scene that could scare or disturb children under the age of five:

Just My Luck is a romantic comedy with a very predictable storyline that will most likely be enjoyed by a teenage female audience.

The main message from this movie is that while some people appear to have better luck than others, the truth of the matter is that, in many ways, you really make your own luck.

This movie could also give parents the opportunity to discuss with their children attitudes and behaviours, and their real-life consequences, such as the risks in being intimate with strangers.